After long wait I finally got my Apple Watch Series 2. Sparing you the suspense, I love it. Much better in every way than the Series 1. However, it is still very limited in a vast already know ways especially apps and specifically the Nike App. Nike has done their best to screw up the app on the iPhone with their latest, and incredibly confusing version(s), yes versions plural because you will be asked to download various version that  do various things instead of an all in one version. Of course this is Nike trying desperately to create a community to sell their products to. I don’t use Nike products but have loved their running app since day one. That is another story however.

The subject of today’s objection is why Nike felt the need to create a different app for the Nike version of the Apple Series 2 Watch? Apple already discounted the Nike Version Series 2 Apple Watch that has the same hardware at $369. The Nike Watch does have a different band in different colors and it is actually very nice. I didn’t purchase it because it looks too much like a sports watch and I travel for business often and wanted the all black version of the Apple Watch as it appears more professional to me. The standard Series 2 Apple Watch costs $399. So $30 was not a big deal, Nike probably subsidized Apple for the difference for a marketing return. That because you know Apple didn’t take a price reduction! 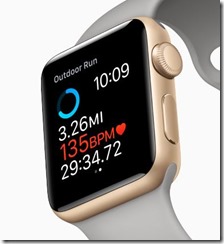 As you can see above the BPM (beats per minute) is very nicely displayed in the middle of the screen. For me this is very critical information to monitor and maximize my runs. Here is the Apple Watch standard version: 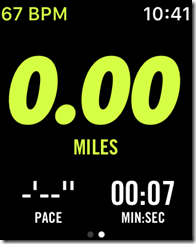 As you can see the BPM is located at the top left and is very hard to see while running. I don’t care how smooth of a runner you are or how good of vision you have this is very small.

There are other apps available for the Apple Watch that do a better job displaying BPM but I really want to stay with the Nike App. I have used it for many years and all my runs are logged in it. I can deal with versions of the app that are better or worse than previous versions because I trust that Nike is continually updating the app to make it better. What is very frustrating is that Nike decided to release a different version of the app on it’s own version of the Apple Watch.

So come on Nike, get on the same page with your apps and users!