Got news this morning that Apple appears to be considering losing the giant 30 pin connector that we all know and love in favor of smaller size Micro USB sized connector type. The obvious reason would be to save on space much like the way they reduced the SIM card size. With 4G LTE coming and the massive drain on batteries they have on Android devices, Apple certainly doesn’t want to lose any more ground in battery life. So reducing the connector pin size could mean more room for a larger battery to support devices that consumers demand faster connection speeds over LTE, WiFI, and Bluetooth to support our growing addiction to streaming gobs of information.

But could a move like this hurt Apple more than it would help? The biggest problem I think Apple has is all the accessories that are available for the iOS devices that utilize the 30 pin connector. I bought several gifts this tear to family and friends that are music playing docking solutions like the iHome. My daughter loves her iHome and plays music through it all the time as she charges her iPhone 4. My son has made it a point to steal it whenever he can as it will also work with his iPod 4th Generation device. (the fighting that ensues is epic by the way).

However, my daughter has made it quite clear that she wants the iPhone 5 when it comes out and has started saving her money for it. But will the iPhone 5 have this smaller connector? If it does it means this iHome which they, I mean she really loves would then  have to be passed down to the “man cub” because it wouldn’t obviously work anymore. That is $100.00 down the drain. The Verge suggested that it could be an adapter that solves the problem of fitting new devices to still perfectly good older accessories, but I would not see that being viable as most devices sit within a recess for stability.

So is Apple ushering in a new connector to streamline their device? iMore seems to think that their source is solid but I think the only thing solid is that there are going to be a lot of hacked off people who will have to reinvest  hundreds of dollars in new accessories to support a new connector. 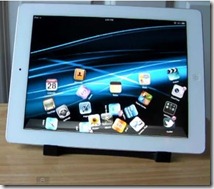