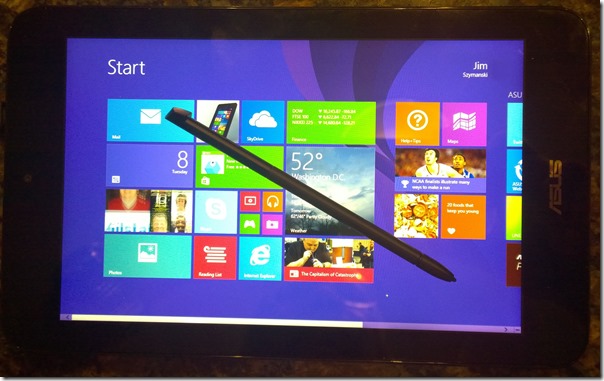 If I were to give you my first impressions from Monday night, you would run from this tablet like the plague. But the good news is that all is good in Note 8 world again. Let me explain. Despite the specific instructions, in fact the “only” instructions in the Quick Start Guide to, “charge your VivoTab Note 8 for 8 hours when using it for the first time”, I powered it on about 10 minutes after plugging it in. Only took about 10-15 minutes for the Windows 8 welcome stuff and setup. As soon as Windows launched I went to the desktop to check the battery level and was surprised to see it at 100%. I figured all was good and continued with the setup; downloading my apps from the Store, activating Office, etc., etc., etc. About an hour into setting things up I unplugged power to plug in a USB drive, (there is only one USB port for charging and accessories)  followed by a wireless mouse adapter (I couldn’t get touch to allow me to move icons around in the task bar – really pissed me off). Somewhere around that time, I lost my WiFi connection. I have a Linksys router with 2.4 & 5 GHz bands. I connected the Note 8 to the low band, but somehow it found the high band and I was getting the limited connectivity message as I never entered the passcode for high band. Each time I tried to change it, the device froze up. Once it simply powered off by itself.  At one point I couldn’t turn it back on and was almost ready to cry. That was about 2:30AM. I finally got it to recognize the low band again, but decided it was time for sleep, so I powered the tablet off and put it on charge, worried all night that I might have to return this new baby. 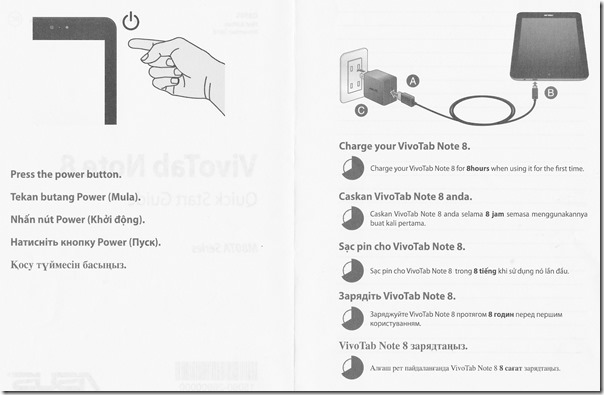 I unplugged Tuesday morning after a 6 hour, powered off charge, and my Note 8 has performed perfectly since powering it back up. Used it at least 6 solid hours yesterday, including 293MB of Windows updates. After all that use and 16 hours uptime, I still had 14% remaining when I powered off again and gave it a solid 8 hour charge last night. Has worked perfectly again all day today. What’s the moral. Follow the damn instructions stupid. Interestingly, I had similar issues with my Acer W8 after not waiting the specified time to start playing. The first week with that device had me wanting to return it. Several months later, there has not been a single issue since that first week. I suspected a battery problem but wasn’t sure. Now I am. So, charge your new device for 6-8 hours, use and abuse it till the battery is down around 10%, Power off and charge again. Repeat 3-4 times. Your battery, and customer support, will thank you.

Ok, with that out of the way, what do I think of this new little tablet. Jimmy likes it. I was a bit surprised that the 64GB drive only had about 49GB available out of the box. There are a total of 9GB reserved for two recovery partitions, making up most of the vanishing memory. Not sure about the rest. After installing all of my preferred apps, activating Microsoft Office and installing today’s 8.1.1 update, I still have 27GB available. That doesn’t include another 32GB (well, more like 30GB) on an SD card that I use for media. With a 32GB device, not sure what I would have left now, but I suspect those hidden partitions would not be there. My 32GB Acer W8 tablet started with 28GB and still has almost 9GB available. Bottom line, a 32GB Windows 8 tablet is ok for mostly browsing and consuming. But if you plan to download apps & games, and do more on your tablet, 64GB is a much better idea. 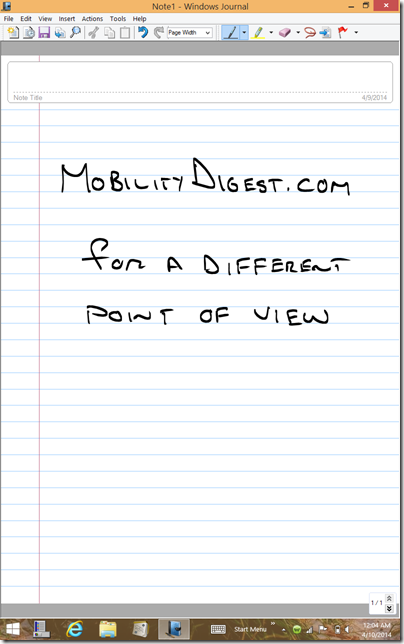 Everything on the Note 8 has been a little snappier than on the Acer. Not by a lot, but noticeably faster. The Acer runs on an Atom Z2760 1.80GHz processor, while the ASUS uses an Atom Z3740 1.33GHz. They both are operating with a 32 bit OS, but the ASUS is an x64 based processor vs. x86 for the Acer. They both sport a 1280 x 800 resolution, but the Note 8 is noticeably brighter and crisper than the somewhat inferior Acer W8 display. In fact, I was surprised last night when I discovered that my brightness on battery was only at about 50-60%. It looked great to me. I turned it up to about 70%, not because I had to. Just because. While not blaring loud, the Note 8 speakers are significantly louder than the Acer. That’s always a good thing.

The Note 8 comes with a handful of pre-loaded Modern apps, some of which I scrapped immediately and a few that I have kept around for future consideration, including; ASUS You Cam, an image editing app, and ASUS Power Director, a video editing tool. Another pre-loaded app was OneNote Modern, included to take advantage of the Wacom stylus. The stylus works as advertised, allowing me to write and draw to my hearts content. Totally different experience than a capacitive stylus. I have also noticed that because of the Wacom screen, tapping small areas in desktop mode are much more precise than on the Acer, or any other touch screen I have tried. Almost 100% of the time, my fat finger can select an icon on a toolbar, or menu bar, with a target smaller than a letter on my my Nokia 1020 keyboard. Very precise. Writing with the included stylus, which stores in a well at the bottom of the tablet (when you hold it vertically) is sort of like writing with one of those small pencils you get to keep score at the miniature golf course, so it’s hard to be precise. But while I was waiting for the Note 8 to arrive I ordered a Wacom Bamboo Feel stylus and that’s like writing with a Cross pen. Very precise and natural. So you know what I will be using most of the time. After playing with OneNote Modern I tried writing notes using Windows Journal, an app that has been included on Windows devices for many years. While I prefer the simplicity of Windows Journal for note taking, the UI is still stuck in XP World. Hello Microsoft, how about a ribbon menu.

The Note 8 has been designed for portrait use, although like any Windows tablet you can switch from portrait to landscape at will. The front logo, buttons and stylus placement all seem to feel and work better when in portrait mode. The Windows button is oddly placed on the left side of the device rather that on the face, which has been the norm up until now. That will take a little getting used to. I also find myself feeling for the volume keys, worried that I will hit the power key instead. Would have preferred if power/volume were spaced a little further apart. Size is almost identical, with the Note 8 being slightly thinner. The ASUS is significantly lighter weighing in at 0.9lbs. vs. 1.2lbs for the W8.

Overall, I am really feeling at home with this 8” tablet.  I already thought an 8” tablet was the near perfect size from a viewing, balance and weight point of view. The Acer was a great step forward. But the new ASUS VivoTab Note 8 has raised the bar significantly. The added memory, Wacom screen/stylus, and ASUS brand makes this a top pick. If you are looking for an 8” tablet that can do just about anything, the VivoTab Note 8 may be what you are looking for. No doubt I will eventually find a few dislikes. But for now, I am enjoying the honeymoon. Now let me get back to having some fun.

ABOUT US
Stay connected with all the latest tech news with Mobility Digest
Contact us: contact@mobilitydigest.com
FOLLOW US
© Copyright 2016 - Mobility Digest
MORE STORIES
Dell