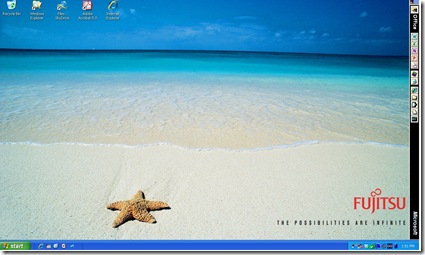 That’s right, a Notebook. For those of you who were still waiting for your second set of teeth to grown in, a Notebook came before Netbooks (cheap Notebooks) and UltraBooks (what used to be Notebooks). I picked up a Fujitsu P7010 Lifebook back in December 2003. I was doing a lot of travelling at the time, and while my kickass MPC Laptop was my main driver, with home and office docking stations, carrying it around was a chore. I tried an Acer Tablet convertible (Microsoft’s first crack at tablets) but the experience was underwhelming, with a very fuzzy screen probably due to some resistive screen layer and other glitches. So, for a mere $1,379, I had a pretty slick ultra portable for the time. Fortunately my company picked up the tab. Back then PC Connection was my best friend. Place an online order before 8:00pm and the box would be sitting in front of my door when I got to the office around 9:30 the next morning. PDAs, spare batteries, docks, cameras, anything with BT in it, external drives, whatever. Called it my instant gratification website. Boy those were fun times if your were a gadget freak like me.

Anyway, back on topic. I have been using the P7010 to help with testing of the WP Print Suite software I wrote about a couple weeks ago. Got in touch with the developer and he has been working with me every day to resolve several glitches (almost ready to give the app a thumbs up so stay tuned). As he is in Italy, I now understand what a long distance relationship would be like. Every morning I uninstall a new version of his PC PrintServer on my desktop, notebook and office PC. I then send him the results along with numerous logs. He gets this stuff around 7-8pm his time. Then when i get up in the morning I have another email, with a new version and more instructions for extracting still another log file. Slow going but it’s working. On Friday after uninstalling/installing another new version I shut the P7010 down as usual and put it in my bag. When I got to the office I realized that I had forgotten to extract one of the log files. I turned the machine on so I could attach the log to my daily update email. But when I did I got a serious Windows Boot Manager Error – File: Boot\BCD; “The Boot Configuration Data for your PC is missing or contains errors”. The error suggested that I insert my Windows CD and try to repair the problem.

I should backup a bit and let you know that when the first preview of Windows 8 was released I used some tool to repartition my hard drive (without affecting my current version of XP) and installed Windows 8 on the new partition. Also, although the P7010 is almost 9 years old, I replaced the hard drive two years ago, so it has been running great. Each time I would boot up I would get a Windows 8 like screen, asking if I wanted to boot to “Win 8” or “the other OS”. Occasionally it would hang if I chose XP, but for the most part it worked OK. I tried updating to the latest release of Win 8, but my graphics chip does not support DirectX 9, so this little guy has reached the end of the run as far as OSs go. Now, I did notice that if I launched XP and only had the PC running for maybe 5 minutes before a reboot, I would get another Win like screen on restart saying that it was repairing the drive. I suspect, and hope this is resolved in the final Win 8 build, that the new OS updates (or tries to) in the background, even if I am using an OS on a different partition. In XP all my updates are set to “alert me”, but nothing automatically updates on any of my machines. Not sure if you can control that in Win 8.

So when I got home from work that night, I slapped in my Fujitsu Recovery disc and discovered that the disc only supports Recovery (full reinstall) and Format. No option to Repair. So…… I decided to try my desktop XP disc instead. Got the the option to Repair without any issue but when it asked me for the Administrator password, things went bad. As noted, I slapped a new hard drive in this baby two years ago and was certain there was only one user and one password, but Microsoft would not accept it. The PW used upper/lower case and numbers, so I tried a few different variants (about 9 times) but every one was rejected. Assuming this was never going to work, I decided to start over. Fortunately, this machine does not have much on it as I use it for testing and for helping people out at their homes, downloading tools to get rid of worms, viruses, etc. I decided to stick with my desktop disc as I knew the version of XP was a tad newer (all those updates suck). I also decided to get rid of the Win 8 partition along with the XP partition, and do a low level format of the entire 320GB drive. Ninety minutes later Windows XP started to install. At the end of the installation everything looked good so I used my Fujitsu Drive disc to restore anything Notebooks need to work well. I thought I was off to the races. Then the Windows XP Validation Screen popped up. I carefully recorded the alphanumeric key on the bottom of the P7010 and transferred the info to the screen; INVALID. Checked again, typed again; INVALID. Tried a third time; INVALID, INVALID, INVALID!. Oh well, guess it was some proprietary Fujitsu crap (using their disc you don’t even need to entre the key). (UPDATE: Different XP version. Dumb ass).

Used the Fujitsu Recovery disc and installed XP again. After the install, the first thing I did was go to Windows Update as I knew that was going to take most of the night. After successfully loading an Active X control, I got an error screen though stating that there was a problem and Windows Update could not proceed. Tried a reboot, same error. Tried opening IE, which in this case was IE 6.0, and after sort of opening the MSN.com page, the browser froze with a white screen. Couple more reboots and tries, and still a no go with Windows Update. So I thought maybe installing Fujitsu Windows XP on top of generic Windows XP was not a good thing. Using the Fujitsu Recovery disc, another low level format of the 320GB drive. Another 90 minutes later, Fujitsu Windows installed, again. While I was waiting for the second format, I started to accept the fact that as this machine was nearly nine years old maybe it had run out of lives and it was time to look for a replacement. I browsed Best Buys site on my L900, looking at Netbooks and small laptops. Didn’t want anything much bigger that my 10.6” P7010, but a DVD/CD player was important for installing stuff, etc. Solved that with an external for $29. Problem though, my financial situation has changed drastically in the past few years and I have been saving up for a Surface RT. Should I go without till December and wait for a Surface Pro? Or get a Netbook now and pick up the Surface RT in October? What is all that going to cost? Decisions, decisions, now at 3AM and a few cocktails later.

After XP was installed a second time I tried Windows Update again and got the same error. I was ready to accept defeat, when I thought, “Windows Update uses the browser. And the browser is an outdated, unsupported IE 6.0”. So, is there a way to sideload IE 8 on the machine without using Windows Update? Well, of course there is. Thank the regulators for that. Downloaded the file to my desktop and thumbdrived it onto my P7010. Installed without a glitch and after a reboot I verified that it was working ok. But when I went to Windows Update I got the same error message. Ok, so how about XP Service Pack 3. Can I sideload that? You betchya. I tried downloading the 350MB file to my desktop but that was a no go as it detected that I already had Service Pack 3, plus it thought the EXE was dangerous (go figure). But hey, my un-updated P7010 is sporting IE 8. I can download it directly to the Notebook, right? Took another hour to download and install, but after the reboot, all was good in P7010 Land again. Windows Update was working, OS was stable, and I just saved about $350. Oh, and I got to sleep before the birds woke up which has always been a priority for for me. The moral, never say never. And never give up.

So what about this little Notebook that could. I decided to do a quick comparison with an Acer Netbook.

For sure this little guy is a tad faster, and less than 25% the price. But not all that much has changed in nine years.

While I am on a little nostalgia roadtrip today I dug out the invoice for the first Windows PC I purchased in July 1993, a mere 19 years ago. It was a custom built model (not many choices back then) and sported a 250MB hard drive (I think), a $200 modem, of course a Colorado Tape Drive and a Super VGA CRT. All for a mere $2,913, including tax.

If that makes you cringe, then you should stop reading now. The first time I saw a Micron computer displayed in a magazine I was in love, and was determined to own one (actually I owned many) someday. Back in 1994-95 they were built for real professionals and carried a $7,000+ pricetag. Then, in trying to stay up with the times they decided to introduce a consumer line of machines. Unlike no-name custom builds and the Dells of the time, Micron (who later became MPC) engineered their machines with components that danced seamlessly with each other. This resulted in a smooth running machine that could provide you with years of satisfying performance. In fact, I am typing this article on my MPC 3.0GHz Millenia 920i which just celebrated its 8th birthday. The baby below though was the cat’s meow back on August 1996, a Pentium Pro with 64MB of RAM and a 2GB hard drive. All for only $4,596, including shipping. Think of the gadget spending spree you could go on at Best Buy if you had that check, in 2012 dollars. Wow! Good for me that my current machine cost less than half of my first Micron.