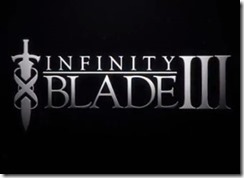 SPOILER ALERT! Don’t read if you don’t want to know any spoilers.

One of the biggest announcements at the iPhone 5S event by Apple was that Infinity Blade III would be released at the same time as iOS 7. I was really excited to hear about this new game that would take advantage of the new A7 processor in the new iPhone.  It promised exciting game playing, a rich graphic experience and even integration of their Clashmobs into the main story line. As I mentioned I was very excited.

September 18th finally arrived and immediately downloaded and started playing the game on my iPad 3. Everything started out amazing and the story line for the game was well laid out. It started with the Worker of Secrets taking us through his history and the creation of the Infinity Blade. It was actually really well done and I was hooked!

So the game starts out with the “God King” Raidriar who has not switched sides after getting beat by Siris in the first Infinity Blade to now contesting The Worker of Secrets who is planning on destroying the world one last time and leaving it in Chaos. It’s not quite clear as the story develops but The Worker is Intending conquer Heaven as well. Raidriar faces a few Titans which you easily defeat and ultimately loses to the Worker. Don’t worry, he returns later. 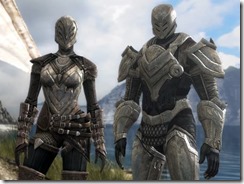 This opening segment concludes and you are taken to the main story line where Siris and Isa share dual roles as characters in your game. Initially I was not thrilled with dual characters as I like to sink myself into one and really live the experience but Chair Entertainment does  a pretty nice job of the integration and it remains clear that Siris is the main character and the true champion if you are successful without taking a lot away from Isa who is fun to play as well. Isa has a bit of a swagger to her but she in no way is taken advantage of by the game to sell her on sexuality. Instead Isa does a nice job with game play.

The graphics are amazing but the scenery is a lot like the last two versions and they even take advantage of the Infinity Blade 2 Version Vault of Tears graphics and add it back into this story line. I was fine with it initially but as the game concluded it became clear they were rushing this game and needed more content.

Siris who is really the legendary Ausar reborn has finally accepted who he was and denies that he has to relive that history and fights against the Worker and making up for his past sins as he says repeatedly throughout the game. So Siris sets off with Isa to find out how to destroy the Worker of Secrets before he destroys the world for the last time.

The main screen is the Hideout which is new to Infinity Blade III. At the hideout is where you will find 4 new characters that will help Siris and Isa. The Gemcutter, Potionmaster, Blacksmith and Pirate are all now added to this location. Originally upgrading these items happened in the menu screen and was noting too exciting. Now however there are actual characters that need to be unlocked that accomplish these tasks for you while you wait or as before you can pay to have them completed earlier. 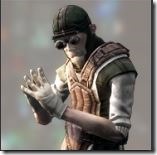 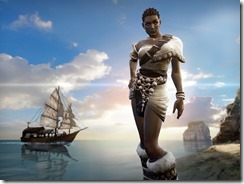 During the iPhone 5S event the imagery Chair Entertainment used was this amazing Dragon breathing fire and yes it is truly amazing. However, where did he go as the game progressed? He stopped by to kick the crap out f Isa once and Siris once. That’s it? I’ll comment more as I take you through my game play in a moment but suffice to say it was very poorly used in the game!!! 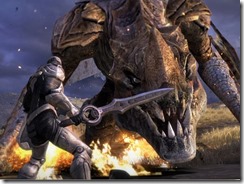 I don’t want to get too long winded or give away too much but what I do want to point out is that this was my experience and how I played both the first and second version to completion as well as this third version may differ slightly from your version based on the following choices I made.

In the first version of Infinity Blade I became very frustrated about how long it took and the constant rebirths after getting defeated. I am fairly proficient at this game and I was getting my ass kicked. So I finally purchased the Infinity Blade and the game changed. I then kicked the crap out of Raidriar and could beat everything. So  then mastered all the weapons which took a little away from the game, but as my levels grew higher, so did the level of skill the Titans Had. The same with the second version. I had the Infinity Blade and my purchase money carry over. So there too I had a very competitive character right away. I enjoyed the second version except the Clashmobs which I will touch on shortly also. I thoroughly enjoyed the second version of Infinity Blade. So when the third version came out and I started over, I wanted to make my one time in app purchase and get the infinity blade. Mistake.

I was not getting my butt kicked with the weapons I had acquired through the game play, it was more I just wanted the bad ass Infinity Blade. It would take forever to get the 600,000 to purchase it and I wanted to use it! So I dropped $20 bucks and got it. I now have $26.99 invested into Infinity Blade III. Mistake. Siris dominated every Titan and before I knew it I was challenging the Worker! Wait? What? The Worker already? What happened? Where di the challenge go? Where were all the levels? This is a very short game compared to the others and at Level 18 with the Infinity Blade I kicked the crap out of the Worker and ended the game. I was left completely empty with the game experience.

The credit were rolling and I dropped almost $30 bucks on this game and it was over. I highly recommend not using any in app purchases and even then the skill level for IB3 is not any more than the other versions. I was completely disappointed and like I mentioned earlier, the use of the Vault of Tears was fine, but it is clear now that Chair did not put the effort into the length of the game like they should have and like they did in the previous versions.

Which brings me to Clashmobs. Chair announced that there was a new Clashmob integration that put it into the game. Come to find out that it was having problems and was not implemented yet.

Perhaps Clashmob 2 was a big part of the game play and extended the game? I don’t know. But it is clear that this is a huge issue with the game.

And what about the Dragon? I had purchased the Infinity Blade and was ready to kick the crap out some Dragon! And here he came. The game control at that point got really weird. Like the game took over my character. In the end I was able to tap and stun the dragon and inflict damage but not even close to finishing him off. This happened twice during the game and inflicted about 10,000 damage and it had a damage max of 100,000. The dragon just flew off! Wait, come back you SOB, I got an Infinity Blade and bad case of kicking some dragon ass to finish! Nope. Never saw the worm again. Killed the Worker and never got another shot at him. Really pissed now.

The game is still amazing. Yes you can call me a sheep because I mindlessly keep buying iPhones and Infinity Blade. I freakin’ love the game. I am so disappointed because there we so much potential with this game! The storyline had been laid out and I was really excited about it. I liked the new characters. Isa, Potionmaster, Blacksmith, Gemcutter, and Merchant. But they were horribly underused! Not to mention that there was no Clashmob integration or game play yet.

I do not give Infinity Blade III very high marks. At the end of the day it’s a total disappointment for me. It had so much potential to be rushed through and shortened like it was. Even though I would still say buy the game because it’s still Infinity Blade and still awesome, I would recommend not buying any in app purchases and making a very short game last a little longer.