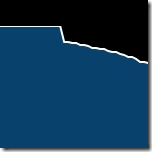 Like most others, as soon as I read about a new update for my L900 being available last week I connected my phone to my PC and was immediately greeted with the “An update is available” message. Firmware: 2175.1003.8112.12085, here we go. The primary purpose of the update was to fix a purple hue issue that some users (not me) were experiencing. But later that night I was setting my phone up for still another overnight battery test and I discovered something peculiar.

My standard operating procedure is to charge my phone to 100% and then take it off of charge and consume some energy till it drops down to 99%, at which point I set it down for the overnight test. This usually takes anywhere from 5-10 minutes of tinkering to get it to drop 1%. But the night of the update I was doing all sorts of things for 15 minutes and was still stuck at 100%. Continued to persist, watching YouTube videos, running speed tests, opening XBox games, and doing anything else that would consume energy, but there was still no change. After 35 minutes I finally gave up and did a soft reset. When the phone woke back up I was at 94%. WHT! Gave up on the test, played with the phone a while longer and went to sleep.

The next morning after going through my typical routine of unplugging from charge at around 8:30am and browsing, reading RSS feeds, BoardExpress, etc. I discovered that my (homebrew) Battery Meter app did not record any change in battery percentage for nearly an hour (I check every day to see if I am still burning 12-13% per hour while actively doing what I do). At first I thought that the background task had been disable or the app was acting whacky. But after recharging while I showered and got ready for work, I monitored Battery meter and the phone’s percentage on the Battery Saver screen and discovered that after the post firmware update, no change in percentage is recorded between 100% and 90%. You can see in the image below that Battery Meter does show incremental charging between 90%-100%, but once off charge, the phone reports 100% till it does a big jump (the app reports percentage every 10 minutes) from 100% to 90%, after an hour, or several hours, depending on whether or not you are using the phone. The first blip in the image is when I put the phone on charge after midnight. You can see when I took it off charge and started to actively use it. The second blip is when the phone went back on charge while I got ready for work. You can see after that it flat lined for several hours after I took it off charge and went to work. 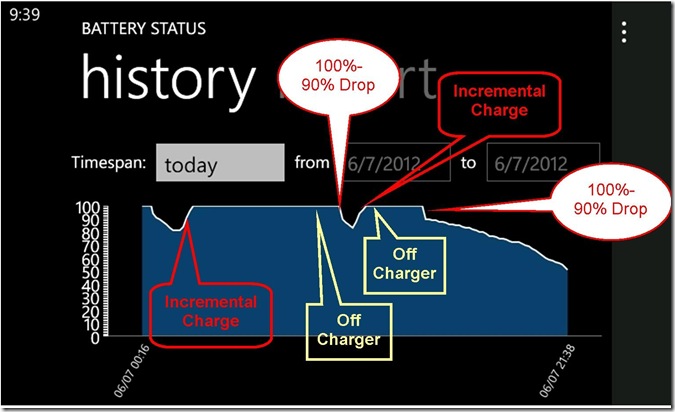 Honestly not sure if this is a “feature” or a “bug”, but this is my educated guess. I have read in Boards about several users who have complained, and even exchanged their L900s, because the phone does not appear to fully charge, showing 99% or 98% when they take it off the charger. Well, this is not a bug or a battery problem. This is how Nokia “protects” your battery by turning the charging circuit off and on after the phone reaches 100% the first time. I have monitored and verified this with the Battery Meter app. Works the same way on my Surround. My guess is Nokia decided to make those users happy by always showing 100% when you take your phone off of charge, so no more complaints. But don’t you think people are going to question why their phone stays at 100% so long and again suspect that their battery, and hence their phone, is defective. For me, it a bit of problem as I can no longer run the battery down to 99% when I start me tests. So when i take it off charge, the battery could technically be between 97% (I have see the charging circuit dip that low) and 100%. I am trying to pull it off within about 10-15 minutes of it reaching 100% so hopefully my testing will be reasonably accurate. We will see.

This remedy (or bug) from Nokia reminds me of how OCD many new L900 users appear to be. While most people are thoroughly enjoying their phones, as can be illustrated by the high ratings the Lumia 900 is receiving on numerous sites, there is a steady list of gripes, and exchanges, that continue to pop up. Is your OCD getting the best of you or are you tolerating some of these.

1. The battery does not fully charge. Well, we covered that above. it’s not a bug, it’s a feature. I think maybe Nokia should have put the cutout at 96% or 95% though so as not to be so obvious.

2. If you go into a perfectly dark room, and tap one of the capacitive buttons at the bottom of the screen, you can see some light bleeding around the blocked out area. Yeah, so? First off, the back lighted buttons only stay illuminated for a couple seconds before they go back off again. And second, does this really matter. I guess, for some it does. I have not gone into a very dark room to check.

3. The vibration sound is unbearable. I wouldn’t call it unbearable. Maybe different, but unusable. I don’t think so. Took me a day or two to get used to the different sound, but now I expect it. I have read about some users who had AT&T unbox their entire stock of L900s to find one that was incrementally different that the phone they already had. Really!

4. The capacitive buttons will sometimes display the multi-task view rather than going back one screen. Ok, this is definitely a bug, but it’s not a hardware problem, and certainly not a reason to exchange your phone. Go to the Diagnostics app (##634#) and test your capacitive buttons, all of them. In fact, test them 100 times like I have. Works perfect every time, right? The responsiveness of the taps works fine. Somewhere there is a timing issue that Nokia needs to work out. With the right combination of factors, I am sure everyone will experience this glitch. Frustrating, yes. Show stopper. Don’t think so.

5. The phone displays a purple hue when brightness is set to low. Best I can tell this was corrected with the most recent update and had something to do with the Samsung displays (they supply displays to Nokia) not being calibrated properly. Some users still think they see a purple hue, but who knows for sure. This is probably the number one reason for exchanges/returns (or possibly #3), even though Nokia acknowledged the problem and said a software update was pending.

6. Volume buttons don’t work when the phone is sleeping. This was also apparently fixed with the most recent update. And again, it was a software issue so no need to exchange a phone because of it.

7. If you press in the upper right corner  (or sometimes lower left) of the screen you can hear a slight click. For those that don’t know, the L900 has a solid body, screw less design. Inside the microSIM slot, under a tamper label, there is a pin that once removed will allow the screen to be removed from the phone for servicing. The L900 is made of polycarbonate, or plastic. If you will allow me to diverge for a moment; my father was a tool and die maker for more than 40 years, and routinely worked on steel molds weighing 2+ tons, with tolerances of +/- a few 10,000th of an inch. When he went to work for Remco Toys in the 60s he was dismayed by everything being made with plastics, but was happy that the molds he would work on now had tolerances of + (no minus) a couple 1,000th. Big difference. Plastics expand and contract, warp, and do other things, so tolerances have to be greater than a piece of machined or molded steel for example. Honestly, I have not tried pressing the corners of my phone, and even if there was a click, so what. It’s just the nature of the beast. Btw, as a pre-teen I did get to play with a bunch of prototype toys. remember having about 300, 4” tall, wind up robots that my friends and I would use to wage battles against each other. Also had fun playing with the original, prototype, Mighty Mike. A friend of my fathers was one of the inventors.

8. The camera sucks! Well ok, there are some issues with the L900s camera. But if you follow the blogs there are a few settings that will vastly improve performance. I expect Nokia to put out an update soon that maximize the cameras performance.

9. Camera button does not wake the phone. Yep, this has happened to me. But, again I went to Diagnostics and tested Focus and Camera dozens of time, and they responded perfectly. So, it’s not my Gel Case and it’s not a hardware issue. It’s a software bug that I am sure Nokia will figure out. Exchanging the phone won’t fix it. May just defer it for a couple days.

10. Power button placement sucks. No, it’s just different. Took me about a day to get used to it and now I believe it was a very intuitive, deliberate, design feature. But if this is a show stopper, so be it.

Don’t want to portray myself as a Nokia fanboy here, but I will admit that I have experienced some of the above bugs (or features) and still love my phone, because I know that Nokia is into Windows Phone 100% and will do whatever it takes to make things right. Why, well my Surround still has bugs after 18 months that never got corrected. My Tilt 2, Fuse, etc.  had their fair share of problems that were never addressed. Despite that, I still like HTC as a brand (although I may like Nokia a little better right now). And for those unlucky few, did you ever own a Redfly?  In fact, I can’t think of any device that I have every purchased that was simply “perfect”. Can you?

NoDo Begins To Roll Out – Really (Not An Early April...