Even funnier than rapper MGK (Machine Gun Kelly) getting the plug pulled on him 2 minutes into his performance at an Atlanta based Microsoft Store, would have been the conversation Microsoft had with The Source magazine for booking him!

MGK Jumped up on to retail tables where there were new laptops displayed and ran up and down the length of it cussing and all the while ignoring employees trying to get him down.

Check out the video below (NSFW) for his short performance smashing laptops and using some colorful language which would eventually end up with him being escorted out by police according to AllHipHop.com.

Maybe Microsoft should have hired these guys? 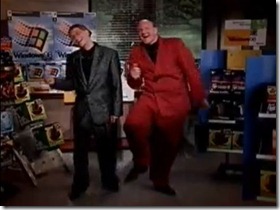