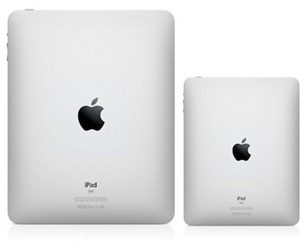 With screen sizes of smartphones now between 4.5 and 4.8 inches, it’s growing harder and harder to justify smaller tablets in my opinion. However, regardless of my opinion, they are still very popular with the likes of the Kindle Fire leading the way. The 7 inch Kindle Fire, an Android Tablet at its core, is wrapped up in an Amazonian UI and all its specialized services like Kindle Books, Music, Games, etc. It sold over 4 million in one quarter and begged analysts to rethink the dominance of the iPad. Launching this year with a Retina Screen, Dual Core processor and Quad Core Graphics, the new iPad again has surged. But the Kindle Fire must have caught more than a little of Apple’s attention as more rumors are floating around today from iMore who is stating it expects the 7 inch Apple iPad to be released in October 2012, just in time for the Holidays, and at a price point of $200 to $250 dollars putting right on pace with other tablets in it’s class. Even though nothing specific has been released, it has been said that a 7.85 inch version would be the right size for Apple.

The funny part of the whole iPad Mini or 7 inch iPad is how Steve Jobs “dismissed” the mini tablet and would not have made one. Software had a lot to do with the issues Steve had and it would in fact have to have scaled down apps from the iPad to work with a 7 inch screen. And with 60% or more of Apple Developers not breaking even with their Apps, convincing them to scale down their already unprofitable iPad app is really going to make them happy.

I know of one person that has decided to hold off on an Android Tablet in favor of waiting for the 4.8 inch Samsung Galaxy S III.  Does it still make sense to make cost effective 7 inch tablets or should Tablet Manufacturers look to drive cost out of the standard size 10 inch versions and allow App Developers to concentrate on making just one size of their App? Ring in and leave a comment below!

(Interested in sharing your iPhone information and experience with others? Why not join the Mobility Digest Team? We need more iPhone writers who enjoy mobility and sharing news and engaging in discussion. Email us for more information: contact at Mobility Digest dot com.)