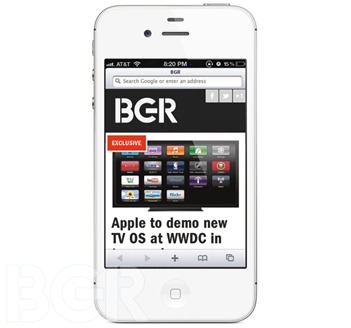 Love the rumors and it builds to the excitement of a major announcement. Of course, all of them as we always say should be taken with a grain of salt. As it turns out, BGR, the dudes with the moles in Apple and a variety of other sources have been pouring out leaks and some of them seem pretty realistic. They broke the story that Apple would be getting rid of Google Maps in favor of their own 3D version and wrapping it all up pretty like in a new UI color scheme like the iPad uses. Out are the blue and blue stripes and in are some silver themed goodness.

The rumor that I think is also most likely is a deeper Facebook integration into iOS6 like that of Twitter currently has. Tim Cook himself left that door wide open and did not dispel this rumor when asked by All Things Digital. This is also the iOS6 update I am most looking forward to as I use Facebook quite a bit.

Automatic updates. Apple seems likely to bring this forward as long as you have your device plugged in and connected to WiFi. Don’t want it to go dead on the carriers data plan do you?

Another good idea Apple seems likely to latch on to does not come from Android, but from Windows Phone. In fact, it is probably the crown jewel in the Windows Phone UI. Live Tiles. To be called Live Apps, Apple could incorporate a customizable App Icon that might better show updates instead of a counter.

We’ll have to wait 6 days for more information as the Worldwide Developers Conference nears.