This morning Howard offered his take on the smartphone market. I figured that even though, like everyone else, he didn’t mention Windows Phone, I’d transcribe and pass it along to you guys anyway given that there’s no Sirius app for WP and I don’t want you to miss out on his genius:

I had a Blackberry for years. So they had me. I was, hook, line and sinker, a Blackberry guy. The first smartphone I bought was a Blackberry. And I would look with envy at people with an Android and an iPhone and I’d say, wow, they’re having so much fun, they’ve got apps, they’ve got all kinds of…

You know, I was so busy yesterday with my computer. I get home, I’m looking through the video podcasts, I’m downloading, I’m uploading, I’m having so much fun with this phone. I’m throwing pictures in off of my iTunes into my library — don’t ask what I’m up to with this phone and with this iPad, keeps me busy all day.

Blackberry had the major share of the market and even to this day they do and it’s like all the executives are on permanent vacation. Like they don’t know that their phone is completely not fun, that it’s so fucking dull and that they’re going to lose everybody? I mean they don’t know that?

Look, the reality is this: Blackberry is losing audience. I have a friend who is forced to use a Blackberry because he works here and the company for some reason will only let them use Blackberries on their email and the whole thing with security. And Blackberries had a huge market share because they were considered ‘for business,’ businesses have used them.

You know, just because you’re a businessman doesn’t mean you don’t want to have fun. I have fun with that thing. [Blackberry] is not fun. If I were in charge of this company I’d fire everybody and say, ‘You guys don’t see what’s going on out in the street with these kids? They’re not buying the Blackberries.’

Ahh fuck it I’ll just wait for it to come on again on the West Coast feed and steal the clip: mp3 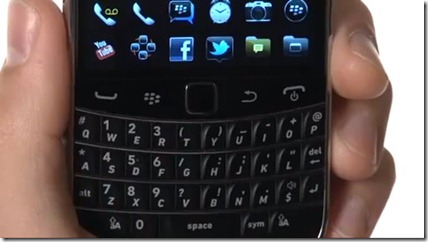