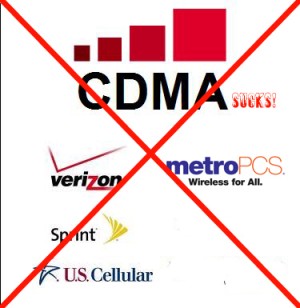 I have always wondered why CDMA (Code Division Multiple Access) phones exist. I do not see any benefits to a CDMA phone. Maybe one of our readers can really tell me why they would get a CDMA phone.  One of the biggest reasons I will NEVER buy a CDMA phone is because it is not really a world phone. I tend to travel a lot to different countries and when I have a fancy smartphone I intend to be able to use it easily wherever I am. This is not really possible with CDMA phones, however, with GSM (Golbal System for Mobiles) I can easily use my phone any where in the world. Just pop the sim out put a sim in from that country and I am good to go in a matter of minutes. With a CDMA phone good luck trying to find a CDMA carrier in other parts of the world and then go good luck getting service on your phone within minutes.

In the US there are three major CDMA carriers Verizon, Sprint and Metro and two GSM carriers T-mobile and ATT. So, CDMA phones do make up the majority of the phones in the United States I think and this just bothers me. Every other place in the world has a majority of GSM phones where as the USA which always wants to be different from everyone else still has CDMA phones as the majority! Is this just the US ego of saying we will be different because we want to be different? Like still using inches and feet and lbs and ounces while majority of the world uses the metric system which is hell of a lot simpler when converting to different units and trying to describe a measurement. For example WTF is 3 and 5/16ths of an inch? why not just use a decimal system like 84.15 millimeters. Anyways, this topic is for another day, back to CDMA phones.

As I am writing this article, I did some “CDMA vs. GSM” google searching and did not really come across any information that could explain to me why CDMA phones are better than GSM. Maybe our readers can knock some sense into my brain and enlighten me. Whenever I am considering of switching carriers I never even think about Verizon, Sprint, or Metropcs my only two options are ATT and Tmobile because I need the GSM capability to switch out sim cards when traveling.

Otterbox Goes DIY, Sort of, with Build Your Own Case Program