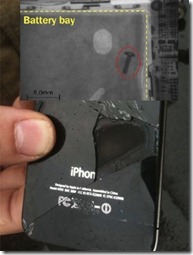 Picture it, you are on an airplane headed to Sydney Australia when all the sudden your iPhone “Self-Combusts”! That’s what happened last November to a traveling iPhone 4 owner as they were traveling “down under”. Now, some 6 months later the Australian Government has concluded it’s investigation and announced that the iPhone 4 in question had underdone a screen replacement surgery at an unauthorized iPhone hospital and  Dr. Ima Hack forgot about a screw and it worked it’s way up to the battery  casing and punctured it. Long story short, make sure you use credible service repair shops and make sure you don’t have a screw loose before you fly!

Here is a quote from the AU Report

The phone was sent to the Australian Transport Safety Bureau (ATSB) as part of an investigation into the matter, which has now revealed that a misplaced screw punctured the battery casing, leading to a short circuit that caused the battery to overheat.
The screw that caused the issue was the result of a botched screen-replacement job from a non-authorised service centre. A screw from the bottom of the unit, adjacent to the 30-pin connector, found its way into the handset, and caused the battery compartment to puncture as a result.