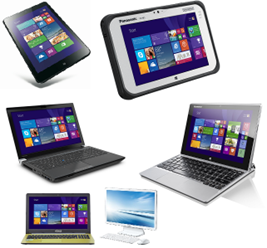 CES 2014 brought a good number of Windows Devices to the table. Panasonic, Lenovo, Asus, Samsung, Toshiba and so many others introduced newer machines. Some are Windows Hybrids, some are Windows Tablets, few are laptops, and few are Dual OS platforms that include Windows 8 and Android boot options, and Steam and Windows 8 boot options. The Windows 8 systems introduced 4K resolution devices such as Toshiba Tecra, which could be used by Graphic Professionals, Engineers who constantly require HD for their daily work. Panasonic introduced 7″ Toughpad, which is expensive though, but it gives industrial standard toughness, which could be used by field staff easily and squarely aimed at enterprise mobile staff. Lenovo’s Miix 2 10″ and 11″ are detachable multi-mode systems, which can be used as Tablets and laptops with keyboard attached. These are clearly 2-in-1 systems. Lenovo also introduced Touchpad 8, which is 8″ Windows 8.1 Tablet. Asus introduced a laptop that costs at $279, but is powerful enough to do a lot of number crunching so easily with the muscle of Window 8.1. This also introduced few All-in-Ones including Samsung’s ATIV 7 All-in-One PC. Samsung also introduced an ATIV 9 laptop with 4th generation Intel core processor.

I am seeing a lot of OEMs finally are putting good effort with various designs that would appeal the budgets and tastes of Windows consumers and those designs definitely are significant from yester and previous years, which put themselves very intuitive and cost effective from Apple’s iPads and Microsoft’s Surface lines.

I think we will see more and more innovative designs for Windows Systems in future instead of shallow designs we had seen in the yesteryears. I give this credit to Microsoft Surface devices. If Microsoft didn’t put effort to bring Surface devices and showed OEMs how to design Windows Devices, OEMs would never have taken effort to bring good designs. We would be seeing iron boxes instead of beautiful laptops, hybrids, tablets and so on.