In addition to crunching and changing search results as you type you query, saving you time to get what you want, Google also changes ads along the way as you type resulting in 10% more paid impressions and 5% more clickthroughs on those ads. Meanwhile since Instant was rolled out advertisers have increased their spending by 2%. They’re saying it’s making Google an extra $5M a week.

An extra $5M may soften the Buzz lawsuit blow, but $5M isn’t cool, $1B is cool — no problem as so far Google Instant is only in the US and is just beginning to test it out on phones. Were Google to deploy it everywhere else, that’s a lot of consumer time saved and a whole lot of cash money earned thanks to the wonders of AJAX, the programming language behind all this autocompletion stuff you’re seeing on the web. Good language to learn if you’re in the mood to learn a language, as Google just demonstrated.

Sounds to me like everyone’s winning here, so ‘atta boy Google. 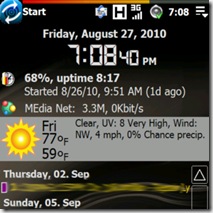