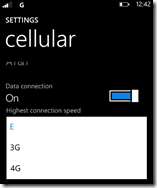 Browsing the Lumia 900 threads over at XDA-Developers last night I picked up a tip that might be of interest. We already know about ##634# which launches the Diagnostics app on your L900. If you haven’t tried it yet you should do it now. It loads a Nokia tool that you can use to check; for dead pixels, verify all your buttons function, proximity sensor, battery drain/charge numbers, and lots more. Just open your dialer and enter the above digits and tap Call. The utility is already on your phone. It’s just hidden from view.

Cubanaso over at XDA found another little trick. Typing in ##3282# opens the Data Field Test utility which includes a lot of stuff I don’t even want to know about. But by tapping the three … at the bottom of your screen

you can tap and open Settings. Change the Network type from from 2G or 3G only to Automatic. NOTE: You can play with the other two settings “at your own risk”. Tap the Back button once to go back to the Field Test menu. The next step is critical so pay attention. Tap on the last option on the screen; Toggle ENS (REBOOT). When it opens tap Start. A few seconds later tap Stop. After a slight pause your phone will reboot (soft reset). If you simply back out of the Field Test menu, “the change you made will not stick”.

Now go to Settings>Cellular on your phone and you will have an option to select E (Edge), 3G or 4G as your highest connection speed. I tried all three and they definitely disconnect you from the AT&T network and then reconnect to a new signal. Edge will show E or G (see the screenshot above), while 3G will show 4G on your phone. If you are in an LTE area, selecting 4G will show LTE. Otherwise I assume it will show and work over 4G.

I tried getting a speed test over Edge, but both Bandwidth and TestMyNet (Microsoft) timed out after a period of time without displaying any results. But I did open IE and navigated to Mobility Digest, and refreshed the screen a couple times, without much delay. I was getting a full 5 bars of G/E while standing out in front of my house at midnight. Set at 3G, my phone displayed 4G and I got what appears to be 4G speeds; 6.44Mbps Down / 0.78Mbps Up. I got similar speeds last week when my phone automatically switched from LTE to 4G a few times. Selecting 4G displayed LTE on my phone and displayed  14.23Mbps Down / 5.23Mbps Up, which is typical. I have experienced speeds up to 20Mbps Down, but it’s hit and miss. These settings have stuck through two soft resets, so unless you go back to the Field Test menu, you are good to go.

I am currently testing battery drain on my phone, with Wi-Fi off all the time, and relying 100% on my LTE connection. Results have been interesting (more on that next week). Next though, I may try an Edge connection with Wi-Fi on 24/7, as I am close to a good Wi-Fi connection 90% of every day. Saving LTE for those days when I am away from work and home.

Tried to do this simple task to disable 3G on my Surround for over a year, but after making the change in Settings, it would not stick when you opened the Cellular menu. Apparently this was an AT&T feature (restriction), as other non-AT&T users had success disabling their 3G. My signal was so crappy in the house (never over 1.6Mbps Down) I knew that the change would improve battery performance, but never got the chance to try it. Thanks guys.

So if you are only using your Data connection for background tasks and rely on Wi-Fi for the heavy lifting, this might be of interest. Or you might just want to tinker. Enjoy.