Michael Dell, at nearly 48 years old is not quite done yet. After building his Round Rock Texas based company from his college dorm room in 1984 with not much more than $1, 000 and a ton of ambition, Dell is trying to come back full circle. In 2007, Dell had to resume command of the struggling PC maker by becoming Chairman and CEO after taking the company public and essentially cashing out on billions. Jump forward to 2013 and Dell has revived the company transforming them from just a PC manufacturer to and “end to end”  provider of business systems and services. With the success he brought back to Dell since then, only the stock holders remained doubtful and hence Dell could never fully revive the stock price. Which has lead to his decision to buy out Dell and take it back to a privately held company that would allow Dell to operate and grow the business away from the public and shareholders “eye” and avoid the scrutiny that reporting sales and profit brings. 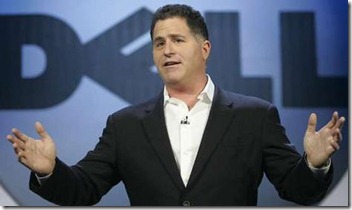 Forbes has also suggested that this move by Michael Dell is not all motivated by business but also is because of his ego and greed. The buyout plan that Dell put forward to shareholders has not gone over well and was criticized by Dell’s largest outside shareholder Southeastern Asset Management consisted of a buyout at $13.65. A pushback offer of $24 per share by Southeastern would add a hefty 18.5 billion to the purchase price. However, a better target price of $16 per share should ease the charge of a shareholder revolt. This deal or another mutually agreed on deal would be set to close at the end of the second quarter this year.

What is interesting also in this buyout proposal is where Dell got the money. Of course he would be putting up part of his small (cough) fortune and has a host of lenders at his disposal who would also be willing to add capitol to this buyout. The most interesting partner to me happens to be Microsoft who would be floating Dell a 2 billion dollar loan. Dell said that :

“Microsoft’s $2 billion loan “strengthens a nearly 30 year strategic relationship with Dell.” Microsoft says: “Microsoft is committed to the long term success of the entire PC ecosystem and invests heavily in a variety of ways to build that ecosystem for the future. We’re in an industry that is constantly evolving. As always, we will continue to look for opportunities to support partners who are committed to innovating and driving business for their devices and services built on the Microsoft platform.”

Microsoft, not only is a partner to Dell in the PC Market, but if you remember back was a partner also in the Pocket PC era with Dell’s Axim line and Microsoft’s Windows Mobile Operating System. Dell, years later moved away from the outdated Pocket PC and Windows Mobile Software and developed and early version of the phablet as well as full size tablet with the help of Google and their Android OS. The one thing I will say about Dell is their commitment to hardware quality and engineering. The Dell Streak was magnificent in it’s build quality as were all Dell branded mobile devices. It’s fair to say that there is little hope of ever seeing a Dell branded mobile device running Windows Phone, but we can always hope. Nokia, who is by far and away Microsoft’s strongest partner, could use some competition other than Samsung and HTC who have developed a ho-hum approach to the platform. Sammy obviously focused on Android and crippling the fruit phone manufacturer from Cupertino. HTC who has lost focus across all platform and is seeking to drop a bomb in 6 days with a new Android device.

I am not a financial guy, and I did not sleep at a Holiday Inn Express last night, but taking a company this size private again will be a huge strain on Dell’s cash flow repaying all those loans. In the US economy which is still flat or only slightly up ticking depending on which media outlet you read, this could be risky for Dell and his personal empire. Dell better have a lot more rabbits to pull out of his hat even if he is able to make this buyout happen.

ABOUT US
Stay connected with all the latest tech news with Mobility Digest
Contact us: contact@mobilitydigest.com
FOLLOW US
© Copyright 2016 - Mobility Digest
MORE STORIES
Editorials

Microsoft needs to be better at recycling their own code and...