Here it is, the HD7 and all its anticipated glory. Some might not be aware of the amazing heritage this phone carries around with it. It all started out with the famed HD2. At its release there was nothing like it. The 1 GHz processor, the 3.5mm jack, the amazing build quality and oh yea, the 4.3” monster of a screen. It was the first of its generation to hit the market, and its chassis is pretty much the standard for most smartphones these days. In fact, the HD2…oops, I mean EVO is now thought to be the flagship Android device by many. The new and “improved” HD7 represents the maturity of the design platform.

The HD7 still sports the traditional hardware design from its first iteration, but it has been outfitted with some much welcomed touch-ups. There is now a dedicated camera button. I think this comes from Microsoft’s Windows Phone requirements, but it’s still great to see. The operation buttons on the bottom of the device (back, windows and search) have all been made capacitive as opposed to physical button, much like the EVO; The power button has been moved to the top right of the device; And a kick stand has been added as well, Ah La EVO. 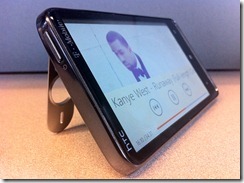 Also new are the dual speakers, one to the top and one to the bottom of the screen. The battery cover and the back of the device have been redesigned and given a very attracted grey coloring. The camera cluster has also benefited from some great design decisions. The plastic around the rim of the device has been giving a nice metallic black finish. This is indeed a very attractive device! 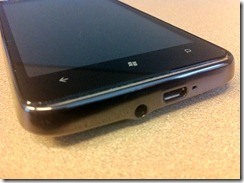 The first time actually holding and using the device, the best part of it becomes very apparent. The build quality is second to none. This phone feels everything like what you would expect a flagship device would feel like. It feels a tad lighter than the HD2, tons lighter than the EVO and every bit of satisfactory. Of all the Windows Phones I’ve held, the HD7 by far has the best build quality.

But hold on a second, it’s not perfect! I still managed to come up with a laundry list of things to watch out for. Because the huge 4.3” screen is up front and center, let’s discuss that first. As I mentioned earlier, this chassis has been around for a while, it seems to be HTC’s bread and butter. That is fine, but the screen on the HD7 really needs a refresh. And before I start throwing rocks, let me be very clear on something! This screen is just as beautiful as the first time you’ve ever laid eyes on it. So what is the problem? These days, you’ve seen a lot more beautiful screens. This is not a Blackberry Torch problem, where the device was outfitted with something that just had no right to be. But it’s a new kind of problem. Some thing I like to call the Honda-BMW problem. Sure you don’t see why you need to spend 30k more for a BMW when a Civic will get you to work just fine. But, um… just make sure you never drive a BMW, and your logic will continue to work. In the same token, just make sure you never look at the screen on phones like the iPhone 4 or some of the newer Samsung devices. Because once you do, you’ll immediately notice how “flat” the HD7’s display is. However, it’s not a total loss for HTC, the screen is still beautiful and the HD7 is the only Windows Phone 7 launch device with a 4.3” screen. Besides, the Android camp doesn’t really seem to care, they love them some EVO. 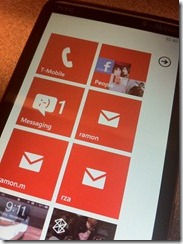 Then comes the power button. HTC’s decision to put the power button on the top of the device was a great one. Why is this a big deal? Well, the power button on the HD2 was placed on the call end button. This ended in total and utter frustration when trying to suspend the screen while on a phone call. Sure you could suspend the screen; you’d just be terminating your phone call. So trust me when I tell you, round of applause for power buttons on the top of devices! But I’m not done yet. Even with its new placement, there is a problem. I find the button itself is difficult to push. It doesn’t stick out enough, so a gentle push doesn’t always seem to work. There is very little feedback to actually let you know you’re pushing it. To make matters worse, because of the angle the top rim takes, it’s a little awkward to reach the button if you’re holding it with your right hand.

And last on my scope is the camera. It’s the same 5Mp camera seen on the original HD2. For some strange reason, this thing sucks in low light conditions. Not that they were great performers before, but this phone has it really bad! I was hoping (deep down inside I knew they wouldn’t do anything) they would at least tweak the camera. Seems to me, they didn’t even do that. The day time pictures all look pretty good, but not amazing! After using the camera on the iPhone 4, I can honestly say the bar has been raised. Too bad HTC didn’t do their part to match that with the HD7. 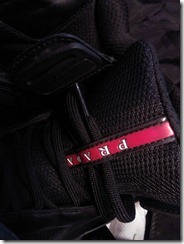 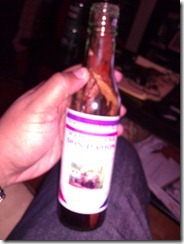 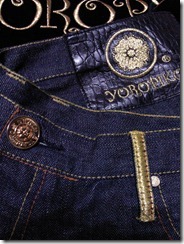 All of the above are not deal breakers, but I feel a little more effort should have been brought forth when dealing with a flagship platform and the launch of a new OS. The mold that “all first generation devices suck and have issues.” should have been broken. When in all actuality, this is not a first generation device at all. This device has been around for some time now. What makes it stand out even more to me is the fact that I sold my HD2 about a week ago. I feel as if I bought the same phone all over again.

But wait, things get better! Windows Phone 7. WOW! Forget everything I just mentioned, because you will surely do so! The operating system is amazing! So much so, that the device really plays second fiddle to the software. For specifics on the operation system you should take a look at our Windows Phone 7 review, but I will offer some thoughts on the device’s performance. There are no glitches, no laggings, no failures, no “nothing!” The phone performs beautifully. It does what you ask it to do, all of the time. The media experience (thanks to the Zune ecosystem) on the HD7 out shines everything else out there. Sorry iPhone, you have been relieved. Browsing the web, checking emails and even typing on the keyboard are all a joy to perform thanks to the large 4.3” inch screen. 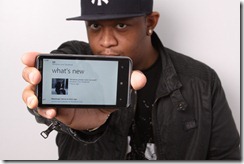 So what do we have here? Well, a winner! It might not be the best spec’d of the Windows Phone 7 launch devices, but nonetheless it has its fair share of reasons you should own it. It is a logical and worthy upgrade choice to any phone offered by T-Mobile. Beautiful hardware and a powerful OS earn this phone a place on my recommended technology list.