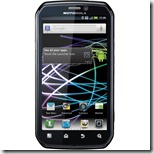 While Sprint is busy contesting AT&T’s bid to take over the world by buying T-Mobile, Sprint is not losing focus on bringing high end devices to market and will soon be launching the Motorola Photon on July 31st. The Photon will come packing a 4.3 qHD screen along with a 8mp shooter. NVIDIA Tegra 2 dual core 1GHz processor will keep the Photon with plenty of horsepower to play those movies while taking advantage of the great viewing angle provided by the built in kickstand. The only question is where can you get one and how much will it cost? Starting today you can preorder your Motorola Photon Android powered device for just $179.99 for the launch date of July 31st on Wirefly.com.

Here’s a little more on the Photon:

Head on over to Wirefly to preorder or for more information:

You Can Now Dual Boot