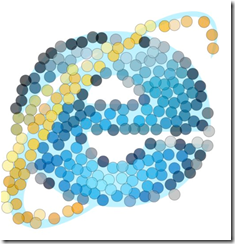 As you probably know, Windows Phone 7 has two languages for developers – XNA and Silverlight. If you’re not aware of what it is, think of Silverlight as a Flash competitor. For developers who code in Silverlight, MS seemed to be sending a signal that Silverlight was the tool to write once and deliver across multiple screens. It would work on a PC, Windows Phone (and Symbian but that’s harder to count) and in TV’ as part of a SOC design. Obviously there are limits to Silverlight, like iOS which does not (and will not) support it. So if you want to write in a code that is universal to all platforms, it’s not Silverlight or Flash…it’s HTML5. And Microsoft just acknowledged that that’s where they’re headed. In an interview with ZDNet, Bob Muglia, MS’s President of server and business tools, states that “[Microsoft’s] strategy has shifted…But HTML is the only true cross platform solution for everything, including (Apple’s) iOS platform.” Of course, this is at a time they release a phone that’s Silverlight based and doesn’t support HTML5. What’s it all mean? Well Silverlight is very mature and it’s smooth streaming is top notch. Right now, as a platform, it’s beyond where HTML5 is, but it seems like MS is acknowledging that it’s great for the present time but the future is HTML5 so expect MS to push IE9 (and beyond) and hardware and software enhancements to speed up and make HTML5 better on Windows. Simply put, if all apps go HTML5 then an OS that’s just a browser will be all you may need…I’m looking at you Chrome OS. So Microsoft is trying to jump ahead of this. It’s odd because we’re so used to MS reacting after the industry has gone around the corner and this time they’re just slightly behind the industry but for them this is early.

What do you think – is Silverlight a tool to bridge the gap? Is MS playing their cards right here?

JukeFly For Windows Phone: Stream Your Home PC Music To Your...