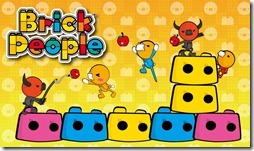 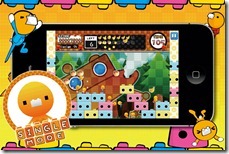 Brick People? Can you say LEGO? You use bricks to build things right? Hmm, you be the judge…

SEGA® of America, Inc. and SEGA® Europe Ltd. today announced that Brick People™, a unique arcade title with a blend of physical and digital gameplay, is coming to iPhone®, iPod® touch, and iPad™ this fall. Brick People, a new family-friendly game played by stacking actual bricks in front of a video screen, has become a smash hit in arcades. Now, SEGA is bringing the fun of Brick People to mobile touch screens, allowing new audiences the chance to digitally stack and snack with the game’s hungry little creatures.

“Players of all ages have really gotten hooked on Brick People in arcades,” said Haruki Satomi, Vice President of Digital Business at SEGA of America. “The concept of using actual bricks to play a video game is unique, but it’s instantly accessible, like handing somebody a set of blocks. It’s a timeless activity that resonates with everybody, and we know it’s going to translate well to touch-screens.”

Brick People tasks players with minding the game’s titular aliens, helping them reach an assortment of tasty snacks by building brick structures for them to climb. Builders will also have to keep an eye out for the Brick Monster, who will demand that players complete specific buildings in exchange for more game time. Brick People contains the following features: