Meh, it’s scrabble but in 3D. I never was one for scrabble, when I played it seemed I always ended up with the Q and Z or good letters but no vowels to do anything with them. Tower of Babble is 3D scrabble where you can build words upwards as well as normally.  Neat concept I guess, but isn’t there a game always called ‘upwards’ which is pretty much the same thing? 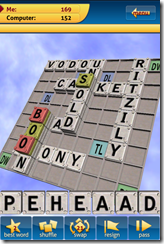 NT7 Games Inc. is pleased to bring you its first foray into the social games territory with "Towers of Babble" – The only word puzzle game of its kind in which players literally play in 3 dimensions.

"I’ve always been a fan of word games, and have drained countless iPhone batteries with my thirst for new experiences," says Adam Saslow, co-founder of NT7 Games, and a former producer at Treyarch Studios, the developer behind the mega-franchise ‘Call of Duty: Black Ops’. "No matter how many word games I play though, I’m always left wanting just a little more. So when we set out to define what our word game would look like, we decided to think outside the box – literally."

Towers of Babble is a unique new entry to the word puzzle game space. Powered by the popular 3D game engine ‘Unity3D’, Towers of Babble is built upon a 3 dimensional board. Players use tiles to build words off of their opponents’ words, and multiply their scores strategically. The difference in Towers of Babble is, players can lay tiles on top of other tiles, adding a whole new dimension to the game.

"Now, instead of racing for those Double Word and Triple Letter spaces, your best moves may actually be upward, not outward," Saslow continues. "This new frontier creates a unique style of gameplay, and challenges fans of word games in ways they can’t possibly imagine without trying it for themselves!"

Towers of Babble is Free-to-Play, supports offline play against an A.I. of varying difficulties, online play against other players or your Facebook friends, and features an in-game store where players can unlock bonus features like ‘Best Word’ tokens or the ‘Score Analyzer’ to help you plot your next move. And with over 50 Game Center achievements and global leaderboards, Towers of Babble boasts the kind of replayability mobile games enthusiasts have come to expect. Towers of Babble is available today for the iPhone, iPad, and iPod Touch in the Apple App Store.