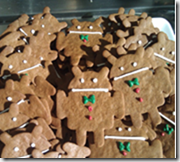 Hey look at AT&T with a press release and all. If you’re an Android user on AT&T and want some official update love take a read:

Android 2.3 Debuted in the AT&T Portfolio with HTC Status, All Post-paid Android Smartphones Released in 2011 Planned to Receive 2.3 Upgrade

Customers who purchased an Android smartphone from AT&T introduced in 2011 can expect to receive an update to Android 2.3.  All of these devices are planned to be upgraded from Android 2.2 to Android 2.3, also referred to as Gingerbread. In addition, Samsung Captivate™ owners will be able to upgrade to Gingerbread.

Delivery methods will vary by device.  Whenever possible, upgrades are delivered over-the-air (OTA), however in some cases the size of the file needed to install the update will require the user to connect via Wi-Fi or connect the phone to a PC to install the update.  Factors such as manufacturer-defined software and other device performance improvements result in each device requiring a separate update which will vary in timing.

Beginning today and continuing over the next few weeks, Motorola ATRIX 4G users will be prompted to install the update.  To download the update, users must be connected via Wi-Fi.  In August, HTC Inspire 4G users will be notified that the update is available and can be downloaded when connected to a Wi-Fi network.  AT&T smartphone users can access at any one of the company’s more than 26,000 Wi-Fi hotspots at no cost.

The AT&T smartphones planned for a Gingerbread update are:

Gingerbread delivers a number of improvements, such as user interface refinements, refined copy/paste functionality and speed enhancements. The upgrade offers improved power management that offers a more active role in managing applications in addition to an improved on-screen keyboard with multi-touch support that makes typing faster and more accurate.