Whoa, we are a long way off from the next iPhone Cellular South, oops, I mean C-Spire. Hope you folks didn’t misunderstand March 7th’s announcement for the iPad 3 for the iPhone 5 and reduce the price too early. We are looking for a mid to late summer time release of the next iPhone. In any case, C-Spire has lowered the cost of the latest edition of the iPhone by $50 and is selling it for $149 .99 with a two year contract. Doesn’t make a lot of sense to me unless sales are really not where they need to be. The distance between the iPhone 4 and the 4S is now a mere $50 dollars and well worth the money for the camera alone. The Camera in my opinion is worth the $100 premium.

It is reported that C-Spire has sold over 1 million iPhones since it was released back in November. Not too shabby for a regional carrier. So if you are in the South and C-Spires wheel house, consider the iPhone 4S for $50 dollars less than the other large carriers are selling it for. 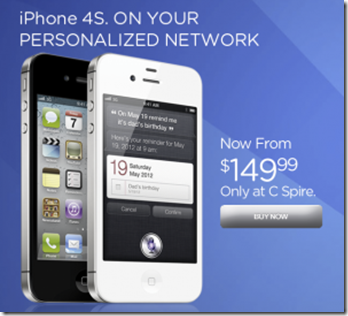