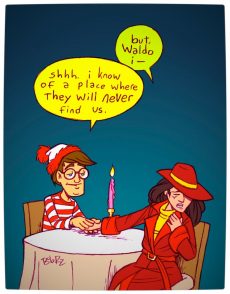 It seems I don’t even have time to write an article about someone tracking you before news of someone else tracking you illegally pops up on me.  I’m starting to believe these aren’t simply isolated events so much as they’re isolated findings of wrong-doing made public in a sea of corporate tracking transgressions. Let’s start with the creepy bastards who are watching you watch their webpages.

These are the kind of cookies that the blue dude from Sesame Street has lucid dreams about. Not only are websites using cookies to determine when you’ve visited the page, how long you’ve been there, and what you’ve clicked through, newly outed third party scripts running on some of the most popular sites including Microsoft.com, WordPress, Adobe, godaddy.com, Spotify, skype, the list goes on, are not only recording this basic info, but recording key strokes, page scrolling, even recording passwords, sometimes completely unencrypted and un-anonymized. Obviously, this is bad news for user data, as not only does the original website have your personal data and credit card info being stored, but they’re transmitting that data to a third-party company. I’d say they’re doing this without explicitly informing you but it’s just as likely they’re informing you, albeit on the very down low, through the troves of EULA’s that most people click through with less thought than they give to what they’re having for breakfast. Some of these third parties are even using human reviewers to delete personal info like passwords and credit card from collected session recordings.  I applaud them for their complete lack of forethought. It’s impressive that you can be this cavalier, or worse, moronic with user data in 2017. But that’s also not the only bit of creepy tracking news. Google couldn’t let other people get all the data.

Apparently, Google has been tracking user’s cell phones even with location settings turned off. You see Google only considers your GPS sensor data as “tracking” information and feels completely at ease scooping up cell tower data and triangulation even when you don’t have a sim card in the phone. Basically, if you’re carrying an android phone and power it up at any point, Google is collecting where you were when you did it, without allowing you any methods to mitigate this collection. Despite Google announcing updates to remove data collecting that go live sometime at the end of November, their TOS has been left vague enough that it’s no wonder Carmen Sandiego can’t catch a break these days.