Or as TNW put it, “Bing is five times better than Google at finding malware,” according to some study, go here for pie charts and links and such. All I have directly related to that is to note that it’s a sign that Bing isn’t copying Google quite as much as they used to, which while that may be honorable of them, perhaps they should do it anyway given this revelation.

But what I’d like to add seriously is that on top of this accusation of Microsoft doing a significantly poorer job of averting Bing users from malware-tainted sites (though better than Russia’s Yandex…) is that Bing still does not force SSL/https connections!

Wait, what? I just tried https://bing.com to see if they even allow for secure searching if someone bothered to type in the https:// even though forcing it would be better, and Chrome is warning me they didn’t even configure their servers properly! Wow. Yes, even with the www, I checked. 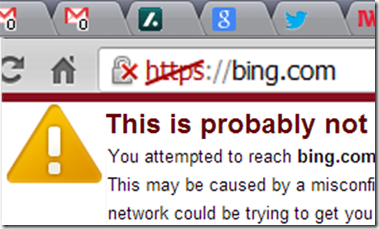 But in Microsoft’s defense, down on their luck today from being downgraded, at least IE gives me a similar warning of their lack of proper security. Hey Microsoft, implement SSL better than this, and while you’re at it, why not go all the way and toss in SPDY?

Most people probably feel you can dodge malware while using search engines (enough so that you can pick the search engine with the pretty changing wallpaper), but unless you don’t care at all how many outsiders get to read what you do on Bing (I guess it doesn’t matter given that the Chinese government Microsoft’s so friendly with routinely hacks into their systems, but still), total lack of SSL, in this decade, should be a dealbreaker for you to consider.