See, look at that, I take care for you guys, I got another free game for you today and this one is called Hero Bash. Not my type of game as it appears to be an online multiplayer game only, or MOBA (multiplayer online battle arena) as they’re calling it, but hey it’s free. As of launch the game has 10 playable heroes and supposedly they’re going to be adding more each month. Graphics looks fairly good, but they’re down it the comical or almost cartoon style. It’s available for all iOS devices and I don’t see any limitation as to the version you need. Below you’ll find some screenshots, link to launch trailer and of course the download link.. 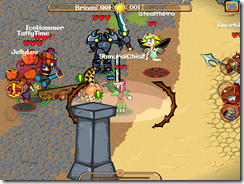 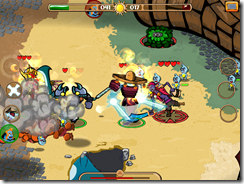 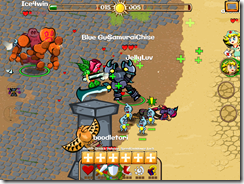 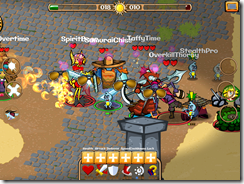 Esc Bros announced today that Hero Bash, a one-of-a-kind Party MOBA (multiplayer online battle arena) game, is available now for all iOS devices. In Hero Bash, players select from an epic ensemble of heroes as they battle to defeat mighty opponents in an arena, upgrade their attributes, find presents that can aid the hero, and impress in-game fans to score big points in awesome multiplayer battles. Hero Bash is available now to download for free at the App Store.

Hero Bash is an intense yet comical Party MOBA game that features 10 playable heroes – with new heroes planned to arrive every month following the game’s release.  Each hero specializes in one unique fighting style: attack, defense, stealth, or speed.  Heroes use a combination of super abilities and secret items to gain victory over their foes and impress the Blue Fans.  Once won over, the little Blue Fans don’t just cheer for the victor, they lend their adoration to improve secret items obtained and increase the team’s score. With real-time online multiplayer featuring up to eight players at one time, Hero Bash is a fun-filled party game for all types of players.

Presents Galore: Players find and collect presents throughout the arena to enhance their hero’s abilities and unleash radical events during battle.

Pimp Your Hero: Reaping the rewards of victories, players can buy items to help during battles, upgrade gear to improve abilities, and customize the look of their hero to give them that personal touch.

Developed by Esc Bros, Hero Bash is available now and free to download on the App Store for all iOS devices. For more information, please visit herobash.escbros.com