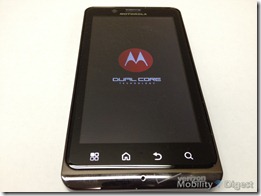 I have always heard people say : “How fast is fast? I’ll tell you how fast is fast…” They would go on from there to tell you about what they thought was fast and why. I’m sure you have heard it before and you are about to hear it again because I just happen to have a Motorola Droid Bionic and it is blazing fast! The Droid Bionic is also impressive to look at with it’s 4.3 inch qHD display and has plenty of horsepower with it’s 1 GHz dual core processor. So sit back and relax as I take you through another Mobility Digest Review on the Verizon Motorola Droid Bionic 4G LTE!

WHAT’S IN THE BOX

The Motorola Droid Bionic come packaged in a two part box with a sleeve to hold it all together. In plain silver box with just a small rectangle picture of the red Droid Gear in the front is all that houses this 4G LTE hot rod. Inside the box there is only the basics, a Sync/AC cable and plug, an assortment of reading material no one cares or even reads, and then finally the device. Long past are the headset days and sleeve for your device because like the printed material they are required to provide you, no one ever really used the headset or sleeve so they could save a few pennies by excluding them.

The front of the device has the all too familiar rectangular form factor with a much more scaled down Verizon lower chrome bezel around the bottom. Instead of being squared off which is very common, the Bionic has a rounded off  bottom with an engraved Verizon logo to the right of the centered mic opening. There are 4 traditional Android capacitive buttons which are backlighted just under the screen which are from left to right the Menu, Home, Back, and Search functions. Across the top is the earphone centered with a Motorola logo just underneath it. To the left of the earphone is the VGA front facing camera and on the other is the proximity and ambient light sensor and LED notification light which is pretty handy.

The right side of the device has the volume up and down button.

The top of the Droid Bionic has the power off/on button to the right side if you are looking straight at the top side and on the left is a 3.5mm audio jack.

The Left side if the device has a mini USB for syncing the Droid Bionic or powering it up with the AC Plug and then just below that is the HDMI out port for streaming your videos or pictures.

The rear of the Bionic is where you’ll find the 8mp camera that also takes 1080p video and also houses and LED Flash. There is also another speaker on the back side along with a mic for better video recording.

Starting with the display on the Droid Bionic has me with mixed feelings. The 4.3 inch 960 x 540 qHD screen with Corning Gorilla Glass is plenty strong enough and has very good clarity, but is not to the level of the Samsung Super AMOLED or iPhone 4 Retina Screen. Motorola’s qHD screen also has under close scrutiny a “cross hatching” pattern that has been an issue for some. I personally did not notice it that much and found the screen to be good when watching videos or displaying pictures.

Even though there are bigger and faster processors out now, the Motorola Droid Bionic uses a 1GHz dual core processor from Texas Instruments (OMAP4430) that handled everything I could throw at it with ease. I  used the Bionic for several weeks and never experienced any lag under normal usage. Apps opened quickly and using the Bionic was very quick.

The memory on the Droid Bionic is :
1 GB of LP DDR2 RAM
16GB internal memory for emails, texts, and apps –actual formatted capacity will be less
16GB microSD card pre installed (expandable up to 32GB)

Even though the Droid Bionic comes equipped with a 16GB microSD Card, the available space on the card has been dramatically decreased by preinstalled software. So much software in fact that only a little more than half is actually available free space. Most of the apps preinstalled are not able to be removed either.

The Motorola Droid Bionic is powered by a 1735mAH Li-Ion battery which I found met expectations for this much improved Gingerbread Operating System device. At no time during the time I had with the Bionic could I make it through a whole day of power using the device, and even under moderate usage I found myself seeking out the AC Plug to recharge the Bionic. Having said that, the Bionic is greatly improved over early Android devices and simply turning off Wifi, Bluetooth, 4G LTE can greatly improve battery life and help you preserve power until you can seek out a recharging option.

The cameras on the Motorola Droid Bionic do a decent job but are not in the same league as other 8 megapixel cameras like the iPhone 4S and HTC Titan (Windows Phone) I found that the Bionic rear camera had some blurry issues at times and also had a hard time with certain red colors. But all in all the camera is pretty good and you can rest assured when using it that do a pretty decent job. The front facing camera on the Motorola Droid Bionic still maintains a VGA resolution for  some reason when better 1.3 front facing cameras are becoming the standard. I am hopeful that this is Motorola last VGA front facing camera. The bottom line is don’t expect much from the front facing camera and you won’t end up disappointed. It’s a pretty bad experience when compared to the iPhone 4S or other devices what offer a front facing camera. The video camera on the Droid Bionic also has the same blurry problems as the camera and I thought the mic did a good job with sound. It records in 1080p HD Video which is pretty cool except for  using the HDMI out function (1080p HMDI Mirror Mode) to share your videos. The bottom line is that Droid Bionic has some high end hardware specs but falls short compared to some other devices on the market.

The WIFI and Bluetooth (v2.1+ EDR) radios on the Bionic perform as expected and  I had no trouble connecting either to my Jawbone headset or airport wireless. It is the speed of Verizon’s 4G LTE network that was the biggest surprise! I knew the capabilities of the 4G LTE service but since I live in a very rural area (it is actually closer to the middle of nowhere) I do not get any type of 4G service. So it was that I was traveling in Seattle area and I was able to grab some 4G LTE service and put the Bionic to the test! Check it out:

The Droid Bionic on the Verizon 4G LTE service has some serious horsepower and the download speed is sick. Watching steaming services like Netflix and Pandora are amazing. Facebook, YouTube, and just plain surfing the net is an absolute joy! I have been critical of Verizon’s $100.00 premium that put on new 4G LTE devices which are $299.99 with two year purchase, but if you live in, or frequent a 4G LTE area I am would seriously consider the the extra money and almost justify it! I do think that Verizon will have only a short time left to enjoy the extra $100.00 premium for their 4G LTE devices because AT&T has started selling their 4G LTE devices and have maintained the $199.99 price point for them with of course the two year contract. To sum up the Droid Bionic running on the 4G LTE network is easy, it is simply blazing fast and where the 4G LTE markets are available.

Motorola has finally listened to the people and flushed MOTOBLUR. It was hard for me to use and had some serious side affects to the devices that had it on it. The Droid Bionic is running Android Gingerbread 2.3.4 and is loaded with Verizon apps otherwise know as bloat ware. I am not a huge fan of these apps and generally remove them from the today screen in favor of other widgets or apps I download myself. The Verizon app list is:

The five panels on the today screen scroll incredibly smooth as do any of the screens I navigated to and from. Gingerbread is a much more complete OS than any of the former versions and is a lot more stable and less consuming on the battery.  Out of all the Android devices I have used it is Motorola’s user interface I know like the best. It is a lot easier to scroll through and is simpler to view .

The Motorola Droid Bionic on the Verizon 4G LTE network is a serious device worthy of consideration by anyone looking to get  into an Android device. The Build quality from Motorola is excellent and the device feels and works great. With Gorilla Glass you can rest assured you have some extra protection just in case an accident happens. With Gingerbread, Android has become a much more refined operating system that make great use of the cutting edge hardware included in the devices. With the TI 1GHz dual core processor, the Bionic was very fast and I experienced no lag in the weeks I used it. Verizon’s 4G LTE network is also seriously fast and I had a blast using it where I could find their networks. There are a few things with the camera I would like to see addressed and I thing Motorola still has some homework to do to get their 8 megapixel shooter on par with other competitors like the iPhone and HTC Titan just released. I also was very underwhelmed with their choice of VGA front facing camera. I also like the idea of the accessories that you can purchase separately for the Droid Bionic but they are over priced and not included with my review unit from Verizon. The bottom line is that I would recommend the Droid Bionic to anyone looking for a well built Android phone to work on the Verizon 4G LTE network. The only downside is that at the time of this review, it is unclear if the Bionic will get the Android 4.0 (Ice Cream Sandwich) upgrade.