If you’re like me, you’ve wondered how little metal balls, like birdshot used by a reasonable, armed group of relatively-secular gentlemen to subdue an irascible “brotherhood” of “peaceful protesters,” are produced in bulk, efficiently, cheaply and in seamless, near-perfect spherical shape, right? Well brother it’s you’re lucky day because I found ourselves the answer: the shot tower. 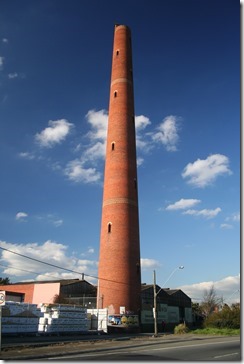 No, that’s not the name of a band (actually it might very well be, but let’s stay focused), a shot tower looks like a smokestack, a couple hundred feet high give or take with a water basin inside at the bottom. Up at the tippy top, there’s a copper sieve (a mesh that has a higher melting point than lead I think), and they heat up lead until it’s molten and dump it through the sieve into streams of liquid metal that snap into spheres on account of surface tension. As these fall through the air, they cool enough to hold their shape as balls as they splash into the water basin for further cooling, subsequent collection and eventual shipment to Egypt probably.

Up until this point making shot balls required casting, a labor-intensive process, a real pain in the balls if you will, there were shot ball shortages, so the demand for a better way to produce them was strong. The shot tower made it easier, and though there is a relatively new method that doesn’t require tower erection, it’s only good for small girly-man shot balls. While I’m crossing the figurative line here, the bigger the balls you’re dropping, the bigger the tower you’ll need. One major innovation in shot towers was to blast air up the tower against the falling balls either to retard their descent or cool them or both, I’m not sure, allowing for shorter towers to cook the balls. Though I would call that a step backwards. I like a good tower and, were I a marksman (which I am, a sharpshooter, and have the summer camp badges to prove it), I can see myself paying a premium for natural balls. I’m a purist. But I digress.

Could you have concocted this on your own? Me neither, but a British plumber named William Watts, and this is almost poetic, figured it out way back in 1782, when, while probably inspired by the rain (it rains in the UK nonstop) or perhaps he cried in dismay of feeling destined only to plumb, he realized that the human teardrop — in spite of how it is depicted in prison tattoos — a little after it begins to free-fall, it falls not with a trailing stem that’s present as it beings to hang, rather as a sphere – provided there is enough altitude to allow for enough time for it to even itself out with its own molecular surface tension, as a shot tower of six stories in height would provide (depending on the ball mass). And it turns out the increasing air resistance at the velocities by which points the balls haven’t completely hardened is not a problem, not distorting the shape. You’d think that would be a problem, right? Wrong buddy, you just conceded you’d never be able to think of this shot tower in the first place, let alone all the wind physics.

Pretty soon Mr. Watts, a true pioneer of zero-G fabrication in the 18th century, had himself a patent and had built a shot tower that remained operational until the 1960s, followed suit by many others around the globe quite quickly as we all need ammo. Perhaps if this plumber had his ballistic epiphany a decade or so earlier it would have been more helpful to the British Empire’s 18th century colonization efforts, but better late than never. In 1808, as you know, Jefferson signed the Embargo Act, so we had to make our own shot towers. I’m guessing we got to work on them without signing any licensing agreements with this Englishman.

src: U of H, YCombinator