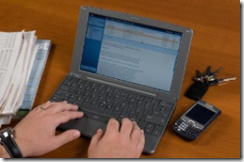 When the Atrix was first demoed they showed off what seemed like a rocking feature – a laptop accessory and early rumors were that we were looking at $150 accessory. Of course, we learned today that the laptop accessory is $500. Maybe I’m missing it but at $500 I don’t get it.  It’s an ATRIX companion with a web browser for $500. But it does remind me of some friends from the past. Remember the Palm Foleo? How about the Celio Redfly? No? Come on.

The Palm Foleo was a 10.4” laptop companion for your Palm Treo. It worked with the Treo but had integrated email, Opera web browser and Docs to Go but internet access was through the Treo. It was announced on May 30, 2007 and was supposed to be $500 until they axed it around September 2007.

OK so that didn’t work but that was followed by the Celio Redfly which was a companion to Blackberry’s and Windows Mobile. The Redfly had very little software itself. It was really just a question of drivers and how it would resize the mobile screen size and orientation on a laptop.  Now this one is still available I think, starting at $200 or $250 for a larger screen/battery. It’s still floating around but I don’t think it flied off of shelves.

Of course, you don’t have to worry about the ATRIX because a super tablet they’re calling the Playbook is about to introduce some whoop ass to the market (provided your Blackberry is tethered to it to provide it with internet access).

So yeah there’s some history here in mobile companions being sold at prices that are in line with laptops/netbooks but have less function and clearly the ATRIX laptop accessory isn’t the last of this line. I’ll be the first to admit, I thought the Foleo was a revolutionary product and I almost bought a Redfly. Well, I learned from the past…