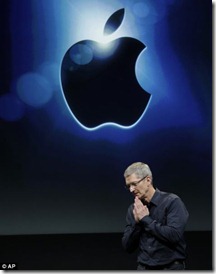 I like the way Analysts approach the 800lb Gorilla with bad news. Very delicately but wrapped in positive sentiments. Such is the case with Mike Walkley of Canaccord Genuity that came out and said that he is expecting iPhone 4S sales to continue to slow down in developed markets. Basically saying that customers are not going to be jumping on the 4S throughout its life span until the “New” iPhone or iPhone 5 is released. This is not shocking of course as many is the fine folk that said that the 4S was not that much of an improvement over the iPhone 4. SIRI is a novelty really and even though we are fearful of crossing Samuel L. Jackson, the camera is the only improvement that hit home for me. I use the iPhone 4S constantly for video and picture taking and it is by a mile the best on any smartphone, hence worth the upgrade for me. But as with the “new” iPad 3rd generation, Apple did not bring revolutionary change to the device. In hind site, and playing devil’s advocate here, I don’t think they really needed to. Other than some antennae connection issues in the iPhone 4, which have been addressed and resolved in the 4S, the iPhone 4 is still an amazing device by  todays standards. Granted LTE is just plain AWESOMESAUCE, but I think the majority of folks would not notice it if they had it. Power users of course love it.

So that brings me back to Mr. Walkley stating that the 4S would slow down in sales as hype of a new iPhone 5 will start really heating up in the coming months as we wait for a summer launch.So is this bad news for Apple? According to Walkley they have little to fear in the smartphone market..As a matter f fact, they have raised the price target for Apple stock to $740. He has even increased the 2013 iPhone estimates based on the iPhone 5.

So are analysts warning Apple about screwing up on the iPhone 5? It sounds like to me that analysts in love with Apple will not be as forgiving if Apple does not release a earth shattering iPhone 5 unlike the iPhone 4S and 3rd Generation iPad they slipped us late last year and early this year. Even though I don’t think them a  factor at this time, the real iPhone killer isn’t Android, I think it’s the Redmond Giant. Unlike Android and their rapid ascension to mass market share with their army of manufacturer support, Microsoft seems content to take this one calculated step at a time. They look to capture 10% or more of the smartphone market this year, which is an attainable goal with the Nokia Lumia Series and their pricing/advertising efforts. Windows 8 and their tablet offering should further entrench them in what Apple calls, the “Post PC” market. Apple needs more than a single or double out of the iPhone 5, it seems no one will be expecting anything less.