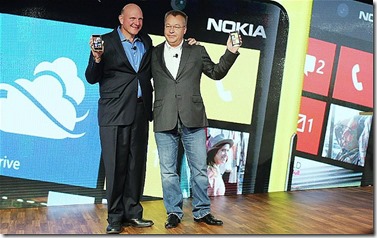 By now, many of you have already heard about Microsoft buying Nokia’s Devices and Services division, which also includes license patents and mapping for the low Steve Ballmer bargain basement deal of 7.2 billion.  That’s a huge amount no matter which way you look at it, but for a company like Nokia many analysts are viewing it as a deal for Microsoft.  There’s no mystery at Microsoft that they are reinventing themselves into a personal device company after having failed with Windows Mobile.  Microsoft had positioned themselves perfectly with Windows Mobile to be a dominant player, but instead took their eye off the ball and lost out to more aggressive visionaries like Steve Jobs and Apple with the iPhone.  Microsoft however, who is never too late to any party, has been working hard with Nokia creating excellent devices in an operating system that would lead them into the future.  Even now, although many tech analysts and writers agree that the devices are outstanding in quality and the operating system is both fluid, intuitive, and easy to use, the consumer market has yet to jump on the bandwagon and drink the new Windows Phone Kool-Aid.

Microsoft, however, is not concerned.  As huge as Microsoft is, there’s no need to hurry and rush Windows Phone to market. With a mixture of quality devices, a refined operating system, and competitive pricing, Microsoft knows that this is a marathon and not a sprint, unlike Google’s use of Android. Google flooded the market with all sorts of Android devices: low- and cost-driven devices as well as spec-driven flagship devices geared towards the tech enthusiast have catapulted them past Apple. The will was heavily criticized for an operating system initially but have worked hard while taking their lumps improving the operating system.  After having purchased Motorola and partnering with Samsung, Google also is in a good position.

Ballmer knows that this will not be enough for Microsoft.  Even though he has had a lot of financial success driving Microsoft, the one thing he lacks is making the brand appealing to consumers.  There’s no question that Ballmer has been the animated face of Microsoft for years and has provided us with a lot of laughs. But as Ballmer has announced his retirement, it was really a precursor to what could be his biggest move at Microsoft: buy Nokia.

There is no question that Microsoft purchasing Nokia makes sense.  None of the other device manufacturers have done well with the Windows Phone platform.  Nokia by far and away is leading the Microsoft charge.  There is something else in the Nokia purchase that could prove more valuable than what has been named in the purchase – Stephen Elop.  Elop, who has already been endorsed by Ballmer and is now a front runner to replace Ballmer when he retires, has now been put on the internal list of candidates within Microsoft instead of being considered as an external candidate by the Board of Directors.

Elop also has experience at Microsoft.  In 2008 Elop was the head of Microsoft’s business division, responsible for office suite of products.  Elop held that gig for two years and was then named CEO of Nokia in 2010.  So now it appears that all of the betting folks that had given Elop 5/1 odds of becoming Microsoft’s head honcho are going to have to RE-look at the odds now that Elop will be a Microsoft employee once again.  Unless there is a skeleton in Elop’s closet that no one knows about, a sure bet is that the current Nokia front man will take over when Ballmer exits.

What’s Up with All the Tethering? [Ask the Readers]