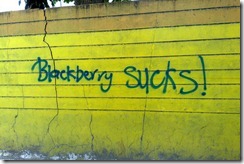 Every single Blackberry OS 10 review I’ve seen is profusely superlative and those that bother to compare it to Windows Phone note that various features RIM stole from Microsoft are even better on BBOS10. Here are a few snippets from an article from some sleazy UK rag The Register that’s getting a great deal of attention:

Microsoft’s Windows Phone 8 wins on style and novelty, but BB10 trumps all comers on efficiency. (You can only get one line of text on a tile in WinPho 8 – it’s a bit limiting.) Here’s an action that I couldn’t perform on Windows Phone OS: flagging a message accessed via IMAP. It’s pretty basic. As with Windows Phone, a contacts card pulls in information related to the person, such as looking for photo albums. BB10 also looks for related info but it’s more focused on business.

Are you listening, Ballmer? Why can’t your Windows mobes do this?

What I don’t get is why the author of this piece chose to pit BB10 against Windows Phone 8 (and everything else Microsoft), versus, say, against Android and iOS. Why bash the underdog that those who’ve tried it love it, finding it absolutely terrific, with virtually no exceptions? Not to mention Blackberry ripped off Windows Phone. After all, by all accounts except these new BBOS10 articles, Windows Phone is fantastic in comparison to the big two. For Pete’s sake even Apple co-founder Steve Wozniak had this to say about Windows Phone:

I definitely favor Windows Phone over Android. Windows Phone is more beautiful than the other platforms. I’m shocked — like a mental patient who was given phone privileges —  how every screen is much more beautiful than the same apps on Android and iPhone. The iPhone has a lot of beauty and simplicity and you don’t get lost as much in it but it is more awkward to use than Windows Phone which, in my book, exudes finesse that will serve as the platform’s lubricant to the top of the pie charts. I’ll be carrying the Windows Phone with me almost everywhere. I feel like I’m more with a friend than a tool. Naturally I have to root for the iPhone to stay number one, but Microsoft with this revived innovation they’re displaying is challenging my allegiance to Apple.

I’ll admit, I’m largely irked by this not because of whether these BB versus WP articles are fair and accurate but because I want Windows Phone to succeed (and not just because I’m a Microsoft shareholder), to hit the number three spot soon, especially while we still have this window of this possibly-superior BBOS10 not having been released yet. I want WP to hurry up and snatch that bronze crown from RIM’s hands because those hands have been asleep at the wheel for over a decade and it’s their damn fault. But to do that it has a lot of upstream paddling to do and these cheap shot reviews aren’t doing Windows 8/RT/Phone/Surface any favors.

I think these articles get written because the writers know that, as a result of loving their phones so much because they are hands-down the best, savvy and intelligent Windows Phone users will flame back hotter in spite of their relatively low numbers than were these writers to bash another platform. Android users are too busy overclocking kernels to combat fragmentation and installing WP8 skins to defend their own platform, and the iSheep are so dumb they don’t even know what a web browser is let alone which mobile platform they’re running.

So people, I know as well as you that it’s easier said than done, but when you come across a negative WP,  Windows 8 or Surface article, resist the urge to fight back and either comment on its thread or link to it on other sites because you’ll just fuel these sons-of-you-know-what writers to keep cranking out this trash. That’s the key. We need smoke not flame. Okay fellas?