QONQR (conquer, right) is a location-based MMO that is evidently available on the iPhone, and is now out for the Windows Phone series.

You can join 1 of 3 teams (humans fighting the AI, humans helping the AI, humans wanting to control the AI).  Strangely enough, in my tiny little bedroom community we have 1 of the 3rd and 2 of the 2nd (I’m one of those 2).

Basically, you use your attack formations and skills to take over an area and defensive ones to try to keep it.  You can build bases to give you resources that will allow you to buy stuff with currency.  Oh yeah, and of course there is a super-currency that you can buy with real money through an in-app purchase.  I’m not a real fan of IAPs, but that’s mostly because right now I’m only working part-time and after-school care is a killer on the wallet…

Your attack forces (nanobots) and your energy to deploy them with can get used up fairly quickly (especially if you’re in an active zone), but they also regenerate at a nice pace.

The UI is actually fairly nice, the use of the map is also good.  At the moment, I’m enjoying the nice diversion this creates.  It will be more interesting to see what this is like in town when I go to work on Tuesday.  I expect a little more activity.

And hey, it got me “Q” in my games bingo.  You can find it in the Marketplace here.  I don’t have iTunes on my Windows-based PC (ugh, is it still awful on Windows?), but this link should work.  If you grab it, enter “Panda” as your referring person!

Location-based MMO game where players battle for control of the towns and cities in which they live, work, and play. Right now an invisible war is raging all around you. A powerful Artificial Intelligence known as QONQR has emerged and propagated itself throughout the world. Those who first detected the presence of QONQR have argued fiercely over its intentions. They have split into viciously rival Factions, each battling for control of the world and its resources. THE LEGION unite under the shared goals of destroying QONQR and saving humanity by crushing the nascent AI before it can mature. THE SWARM are convinced that QONQR promises an era of unprecedented technological advancement and human prosperity. THE FACELESS are a loosely organized faction of militant hackers who want QONQR’s technology for their own ends. Enlist today, join a faction, and begin battling your friends for control of your neighborhood and millions of other real world locations in 250 countries around the world! QONQR is a location-based, massively-multiplayer game of strategy. It features: – 3 million battle zones in 250 countries – Dozens of offensive and defensive maneuvers for compelling strategic gameplay – Three unique factions with a rich storyline – Persistent world Base construction – Awesome weapon and ability upgrade opportunities – Play with your friends on iPhone (coming soon to Android) 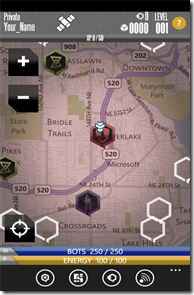 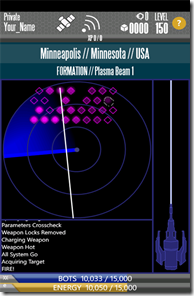 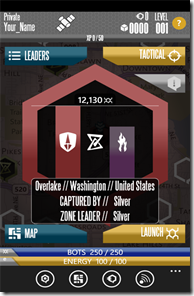