Many thanks to Andrew Bares for providing the live tweets from Microsoft Booth.

There is nothing major shown regarding Windows Phone 7 except the Local Scout integration with Open Table API for making reservations at a restaurant and hardware of Nokia Lumia 900 and HTC Titan II, both are high end Windows Phone 7 devices running on Mango (Windows Phone 7.5) supporting AT&T LTE. 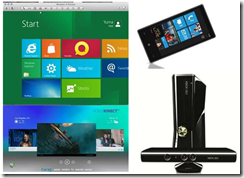 Surprisingly I haven’t seen a single reference in the tweets about Skype for Windows Phone 7 and Skype for Metro. I hope Microsoft would talk about it at least during Mobile World Congress 2012 in Barcelona, Spain. Another surprise is until now Samsung, their another major OEM partner, haven’t announced LTE Phone running on Windows Phone 7.5, probably they have something in surprise and will announce at MWC 2012. But Samsung announced good Windows 7 Tablets today though.

The focus is on Windows 8 majorly and Microsoft’s Marketing Officer Tami presented the show regarding Windows 8.

The interesting points from the demo are:

3. Apps written for Metro will run on both the ARM and x86 processors without issues

4. Well anticipated Microsoft Store, that will be launched in February supporting all languages that Windows supports. That makes it global store.

5. Symantic Zoom (a new feature). This lets you pinch out on the start screen easily pan through. This also allows users to group Live Tiles and name them. I wish I see this feature adopted onto Windows Phone 7 as a quick update from Microsoft. I hope Microsoft patented this.

7. Desktop version of Office with split screen. Metro on the left and Office on the right. This definitely reminds the dead project at Microsoft also knows as Courier. If Microsoft brings out the Courier capabilities into this, my Money is right on it. I hope Microsoft patented this too.

9. HTML 5 Videos can be watched only in Metro browser.

10. Every windows 7 PC will be ready for Windows 8 on day one

12. Xbox is not limited to Gaming. It is for entertainment including Movies, Music, and other media.

14. Kinect will transform the “TV” experience.

14. Kinect can be used outside of gaming, education, medicine etc.

15. Future enhancements of Kinect will bring-out two-way experience of TV Entertainment, Microsoft presented interactive Sesame Street Show, where you through virtual coconuts on Kinect and it puts them inside Elmo’s world. I could only imagine how much my kids would get excited if they get something like this experience.

16. Microsoft is planning to ship next milestone of Windows 8 in February.

17. Microsoft is totally empowered by Metro.

Side Note: It seems Steve Ballmer uses a Nokia Lumia device himself (as per Andrew Bares tweets), I think it is Nokia Lumia 800 or could be 900, who knows. I haven’t attended the CES personally.

In between the show a group of African-American church singers sang the tweets that people twatted about Microsoft CES, Tweet Choir. Very interesting.

Windows Phone Xbox Live Games About To Go On Sale