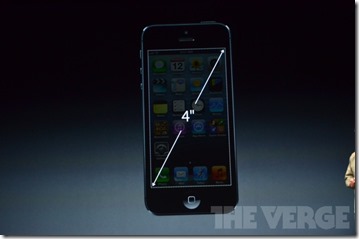 We’ve all been waiting for this moment for months. The iPhone 5 has been pending our love for many different reasons, perhaps the most important to me was the fact that this was Steve Jobs parting gift to the world. Secondly, its an iPhone, how could you not be head over heels for this thing.

After months, which felt like years of rumors and leaks, Apple took the stage today to let the fruit out of the bag! The iPhone rose from the ground in true dramatic fashion only to be met by an epic “wait….what?” We’ve seen this before. We’ve seen this in leaked images, videos and even manufacture unassembled pieces! WOW! Every last image and video leak was spot on. That has never happened before!

This took a lot away for me, I was sincerely hoping the images (while nice looking) were some sort of bait to throw the sharks off. The fact that I had seen it, speculated and even wrote it off, made the whole deal a lot less special for me. But none the less, the iPhone 5 is beautiful. A well designed phone indeed! Made from aluminum and glass, it sounds like the iPhone 4s all over again, but this time 20% thinner! Yes, that is the official metric.

YES! the iPhone 5 gets a bigger screen! 4 inches to be exact, much improved resolution and color saturation. The camera stays at 8 megapixel with a new crystal lens, 2.4/f and some new software tweaks. The new A6 processor and graphics chip to match, Apple describes performance as two times as fast in both performance and graphics, they even go so far as to coin the phrase “console like” graphics. A new 30 pin charging port is smaller and thinner, and Apple will be selling an adopter to make sure it works with your legacy hardware.

Let the record show, Apple has taken the time to make an already fine device a bit more fine. But that’s just it, could they afford to do that? Is that enough for the consumer? Without a doubt it will sell, but the real issue here is the innovation curve, or lack there of. The rest of the industry is in high gear, with devices like the Lumia 920 on its way and the SG3 running the show, Apple needed to hit a home run. They did not. Instead, they played it safe and went for first base. This is a problem. This is the beginning of a never before existing gap that Apple will now have to watch widen.

The phone is better, it does have improvements in all the right areas, but it just not enough. Apple and the iPhone 5 are no longer leading the digital age. Nokia is looking to snatch that title, a title which Samsung is currently commanding with the SG3. This is the iPhone 4S all over again folks. We had our hopes high and now we will walk away with it “yea…I guess….its not that bad…”