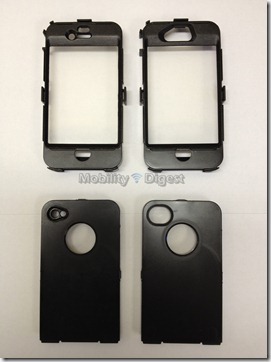 If you have been out today and standing in line for the Apple iPhone 4S then you may have noticed the displays of OtterBox Defender Cases for them displayed. The ultimate in protection, I have a series of reviews on the Defender Series including a full review of the iPhone 4 OtterBox Defender Case that you can read here.

Since Apple changed almost nothing on the exterior of the iPhone 4S, then it would be expected that the cases should all be the same right? Well, not exactly. It looks like you are still going to have to cough up another 50 bucks or simply do some cutting on your existing OtterBox Defender to encompass the following changes.

As you can see from the picture, the new OtterBox, which is positioned on the right hand side of the iPhone 4 Defender case varies in that it has larger openings on the front facing camera as well as the rear facing camera.

In the past, the white iPhone 4 did not play well with the Defender and many people had issues with the screen not going to sleep while on a call. With new and significantly larger openings, this should be eliminated on the iPhone 4S, but I cannot confirm this as my local Best Buy did not receive any white iPhone 4S for me to test with. However, OtterBox has confirmed that the front cut out is compatible with the iPhone 4S:

The back side of the case as well has a much larger opening to un-shroud the camera and let more light in the significantly improved iPhone 4S camera. I tried to contact OtterBox for an official explanation but they were incredibly busy today, so I will update this when the rep calls me back. Since there is no sensor on the back side, it is safe to say that it has to do with improved lighting for the camera.

The last thing that OtterBox has changed is the Silicone outer sleeve. I am a little on the fence with this change because I happen to remove the iPhone from the case frequently for cleaning and removing the SIM card to go into another device. This new silicone material, while still very high quality, has a much stiffer feel to it. Upon trying to install it and then remove it, it is much more difficult than removing it’s predecessor. Here is the reason OtterBox has given me which is also on their website:

OtterBox has also included a more robust silicone skin on our Defender Series iPhone 4S case line to provide more durability, resistance to dust and lint, added grip and an improved ability to hold its shape over time.

So as you just read, it was improved for very good reasons, but if you frequently remove the case for use in an iHome, change phones, or whatever, you will find it a lot more difficult. Still, the OtterBox Defender demonstrates why it is ultimate in protection for your device and why OtterBox continues to grow create great cases for our devices!