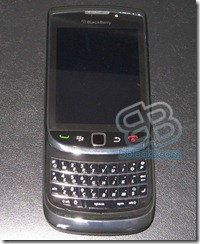 When you think of BlackBerry, you naturally think of a candy bar style QWERTY Keyboard device with a  cool trackball on the front right? Well, if you are not a BlackBerry person, sit down, because it looks like BlackBerry is jumping out of the box with a New Slider Device that looks to soon hit the market. Still unnamed at this point, speculation is that the new BlackBerry slider could wear the Storm 3 badge or be part of the Bold Family.

Not a whole lot else is know about the device except that BBLeaks.com got their hands on one with a bad battery and could not be powered on. They say that the battery is a 1050mAh and is a bit thinner than the normal DX-1.

A few of the other blogs have not been too impressed with the slider  platform BlackBerry is using, but I got to say that it looks pretty good. 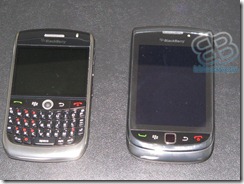