In case you missed it…Really? Seriously? The Apple iPhones were announced yesterday and now that we have all had time to digest the news, let’s look at a few things. First, it was every bit the Ho Hum release we expected. Other than iOS 7 which in many ways is still catching up to other operating systems, the hardware was incredibly lack luster to the say the least. This chart will pretty much sum up the bottom line. Apple is holding back, throttling down, and maximizing the momentum they have with as little innovation as possible. 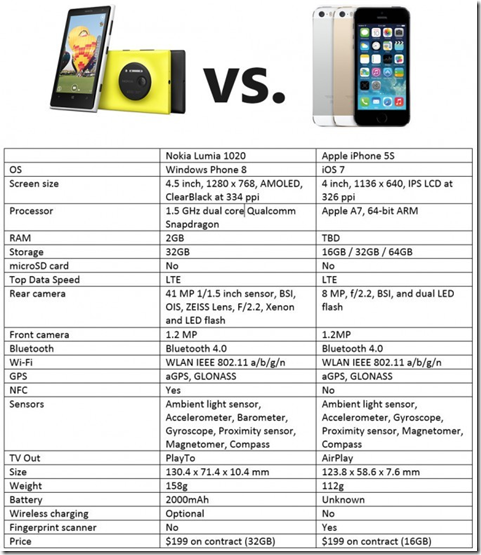 As you can see the similarities are absolutely shocking. The Nokia Lumia1020 and the iPhone 5S are best in class and the flagship centerpiece of both companies mobile offering. In my opinion what Apple trumpeted yesterday was the A7 processor, the camera and fingerprint security. The physical device has not changed from the 5 as we had hoped. It was much needed relief when the iPhone 5 went to 4 inch screen, which was major shift from Steve Jobs direction and personal preference. Apple simply could not ignore the massive market trend of a larger screen smart phone any longer. Even with this small victory, the larger screen size only provided extra real estate in landscape mode with the length getting changed and not the width. I had hoped Apple would increase the width in the 5S but suspected because of massive design changes and costs, that they would milk out the current design for as long as possible. The retina screen is beautiful, there is no questions. In my opinion Apple does not dominate any longer here and the Lumia, with a beautiful display and a 4.5 inch screen is much more preferred for daily use and web browsing.

Camera’s will be a huge let down for Apple I think. First, I won a iPhone 5 and the pictures are outstanding and do everything that I need it to do and then some. I suspect that many of the smart phone owners are as equally satisfied as I am and anything better really becomes lost to them. Keep that thought in mind when we talk about processors in a minute. The Nokia Lumia 1020 is simply amazing and I have yet to see it’s match. I am not a fan of the impression 41 megapixels casts on the device however. To me it simply implies that there is a gimmick behind it. There has never been thing remotely close to that sort of megapixel capability. I can assure you of one thing about Nokia’s camera, there is no gimmick, it simple the leader currently. Apple, chose to stay with an 8megapixel camera and update aperture by 15% than the previous version in the iPhone 5. The LED lights got an update and they look to be a much welcomed improvement. Apple also added a 28 megapixel panorama creator and “burst mode” to the new iPhone 5S. I do not hesitate to say that it will be another outstanding picture taker. From a marketing standpoint, it is a flop. Not moving the Megapixel count to something like 12 does not provide a measureable to consumers to compare the hardware of the 5S to the original and current iPhone 5. Also, it does not narrow the gap between the 41 megapixel camera of the Lumia 1020. Both will be impressive cameras, and apple will be hard pressed in what I have seen of the Nokia 1020 shooter to best them.

Processor and Fingerprint technology. The Apple iPhone 5S will get an updated A7 64bit processor. The problem is that the majority of the consumer base could care less and I think Apple gets that because they redundantly say that it works better. Of course it works better. That should be a no brainer. Apple consistently as I mentioned links the better processor to gaming, with the Epic Games Infinity Blade III announcement and the camera. The fact of the matter is that processors no longer sell devices and I have never encountered a problem with my A6 processor. In my opinion it is not a selling point or reason to purchase the iPhone 5S. Apple simply has done an amazing job since the iPhone 4 optimizing the OS and building a very solid device that performs well. Lastly, I am really lost with the whole fingerprint technology. Apple paid 350 million for AuthenTec last year and has provided them with the ability to give iPhone 5S owners fingerprint security. Simply press the home button and the iPhone 5S recognizes your unique finger print and unlocks the device. This sensor ability is called TouchID. Apple went to great lengths to assure iPhone 5S consumers that your fingerprint is totally secure and will not even be backed up on iCloud. In a world where ANYTHING can be hacked, I’m not convinced nor do I even lock my device the majority of the time with a passcode. Unless traveling do I enter in a passcode. The passcode is effect and does not betray the owner in any way should your device be compromised. It could very well be that your fingerprint is never compromised in any way by hackers in the future but for me, a passcode still is simple and effective. I will say the emphasis on the sapphire crystal was impressive and had a certain wow factor.

I’m a sheep. I am truly sorry everyone. My logical and hopefully rational side is screaming bloody murder that this is a pass just like the iPad 4 was. I kept the 3 and thumbed my nose at Apple. With iOS 7 going to be available  for the iPhone 5, I am wondering if I can fight my long standing addiction to having the newest device available and stay with the iPhone 5? I think a lot of people will be staying with the iPhone 5. Time will tell and if you iPhone sheep like me are every wondering about how the grass is on the other side, it might be time to check out the Lumia. 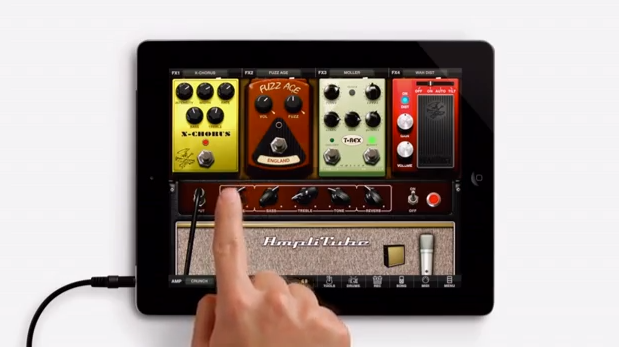