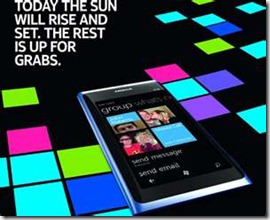 Today not only did Nokia official announce the Lumia 800 (SeaRay) and Lumia 710 (Sabre) they also showcased their software swagger in the form of Nokia Drive, Nokia Music, Nokia Maps and Nokia Pulse.  Combined with the beautiful Lumia 800 hardware they have released a strong contender for all their target markets.  Nokia hasn’t stopped there.

Starting earlier this afternoon Nokia has started to plaster TV ads and even has made huge efforts to blanket entire TV channels with ads.  This is advertising done right!  In fact, I don’t think I’ve ever seen a company sponsored ad onslaught to match this.  Yes that includes Apple.  Nokia has sponsored an entire evening worth of programming on Channel 5 in the UK.  Not good enough you say? Well how about taking over the channel’s website for the cherry on top?  Take a gander and be in awe of Nokia’s prowess!

This makes me smile.  Regardless of your platform of choice, if you are a fan of effective advertising then you have no choice but to give this two thumbs up.  Ladies and gentleman I believe that I can hear the onslaught of preorders racking up right now.

The winning ticket for a strong and growing platform is beautiful hardware+great software+effective advertising.  It looks like the partnership of Microsoft and Nokia has these things in spades!  That’s just my opinion and I’m sometimes off the rails so what say you?  Leave a comment and let me know how you really feel!