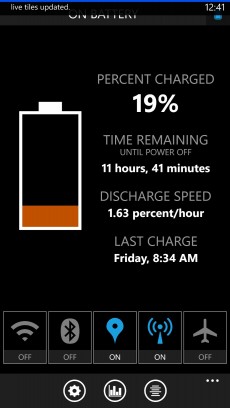 Monster sized phone + tablet = Phablet right? If it’s the Nokia Lumia 1520 it also means battery life or at least it does from one of our readers. The 1520 is massive and where the mobile consumer market once snubbed these devices, (remember the Dell Streak?) it now seems to be embracing them thanks to Samsung and the Note Series. Microsoft and it’s Windows Phone platform can now throw it’s hat in the ring with the Nokia Lumia 1520. With it’s 6 inch 1080p HD Screen, it’s quite a handful. Nokia stuffed a 3400mAh in the 1520 and advertises 24 hour talk time. I would think anyone holding this beast up for more than 15 minutes would be getting tired! Anyway, we got a heads up from Aaron that he is digging the battery life of the 1520 and I thought I would pass it along. Of course the email opened up a flurry of “I want it” among the team here at Mobility Digest. So what do you think? Too much phone for the causal reader or are you asking for one for Christmas? As usual comment away and like us on Facebookand Twitter please! “This is impressive. Its the energizer of phones.” Reader Submitted by Aaron