AT&T’s iPhone 4S has an HSPA+ radio in it and AT&T’s worked hard to get consumers to accept HSPA+ as 4G versus HSPA without the + which we all call 3G. HSPA has a top theoretical downlink of 14Mbps. AT&T’s version of the iPhone 4S supports the HSPA+ standard, which is pretty fast, but that phone’s radio has a max theoretical speed of 14.4Mbps, just like non-Evolved HSPA which AT&T has touted as 3G. It’s almost as if Apple gave it a slower HSPA+ radio to even the G playing field between the three carriers.

If there’s any difference between a phone with a 14.4Mbps HSPA+ radio and a 14.4Mbps HSPA radio, I can’t find it. What I did find without looking to hard is AT&T touting their HSDPA/HSPA as offering a peak theoretical rate of 14.4Mbps in a press release from years ago and not until now have they tried to call that speed 4G.

So, according to TIMN, AT&T is duking it out and “in talks” with Apple to get a little 4G icon thingy on the status bar indicating its connectivity as being 4G regardless of the iPhone 4S’s radio having a candy-ass theoretical peak of 14.4Mbps, which is not only very misleading and in my view crossing the line of touting in this 4G/3G debate way too much, getting that icon and executing the ensuing marketing about their special 4G iPhone 4S, talking and surfing at the same time at 4G speeds versus the garden variety, but 3G, CDMA of Sprint and Verizon’s iPhone.

When someone hears the term HSPA+ and has a vague idea of what it means, the theoretical speeds that come to mind are 21Mbps minimum. Not 14.4. When you say 14.4, people think HSPA. When you say HSPA+, 21 or 42 or more; HSPA with no plus, 14.4 tops. Why might they think that? Common sense, some time on Wikipedia and AT&T marketing.

Pathetic, AT&T, trying to split a hair again many argue should have even been split the first time. As usual, you suck.

By stretching the 4G-marketing barrier to characterize a standard with a matching top theoretical speed of the radio inside their new iPhone, they’re lying too much and should be called out on it. If Apple gives this to them, I will be disappointed. This isn’t just about getting a status bar tweak. If they get that 4G icon for speeds that could be achieved on a 3G standard, they’ll market the hell out of it and screw Sprint even harder. 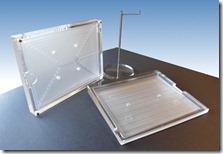