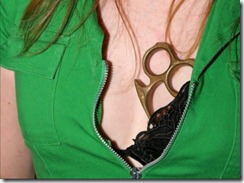 This one has three feed horns and two local oscillators. I removed the cover off of one of the feed horn sections exposing two antennas with the left and right polarization and the DRO oscillator. On the backside of the board you can see that there are two rigid coax connections between the DRO and two of the feed horns. Knowing this was handy as I could tie into the ten gigahertz oscillator easily. These LNBs have circular polarization. It shouldn’t make much difference in this project but is interesting nonetheless.

You got all of that, right? Makes sense?

I was doing some “research” last night and came across a DVICE article about a do it yourself TSA-like microwave body scanner made out of a three dollar antenna horn from a scrapped satellite dish and a soldering iron in the shape of a revolver. A from-scratch creation, one of many, of Oregon’s own Jeri Ellsworth to whom that brass knuckle-packing bust belongs. My mind was immediately blown as I have never in my life seen anyone breeze through such a sophisticated and ingenious hack, male or female, and among the hackers I’ve met in real life, females were few and far between and, no offense, generally not so head turning.

It’s no secret that there is a shortage on women who are obsessed with hacking and its various forms, and an even deeper shortage of relatively sexy and sassy ones without too many piercings and neon colored hair; so to find that rare a phenotype belonging to what may likely strike you as the greatest master (mistress?) of silicon you’ve come across, that, along with this particular hack intrinsically, is newsworthy.

Perhaps the attitude I’m exhibiting right now could account for this drought of dames.

I feel a little guilty contributing to the pile of articles about this woman that go on and on about her being a lady who’s easy on the eyes but judging by the youtube clip and the comments she entertains I don’t think she seems to mind. Before you watch this, I must warn you that listening to her ramble through things that make zero sense to you might feel emasculating as she is a lot smarter than you may think women should be permitted to be in public.