Don’t you hate it when you lose things and have to buy another one? I did that recently, I get lots of mobile stuff for review and I broke my phone mount in my car but I knew I had another one somewhere but I just can’t find it. So I went over to Amazon looking for a cheap cellphone mount just to hold me over until I found my other one and then I’d have a spare as well. I picked one up for $6.99 shipped for free as I have Prime and I’m very happy with it so I thought I’d do a quick review to tell you guys and gals about it.

What’s in the Box?

The packaging this came in was just a plastic bag, so no picture of that for you. It arrived in a padded envelope, no problems there.

You can get it in various colors but I wanted orange, don’t know why I picked that color, just wanted something bright.

The holder is basically two pieces of plastic that slide with a spring between them too create tension to hold your device in place. Simple design really, but it works. 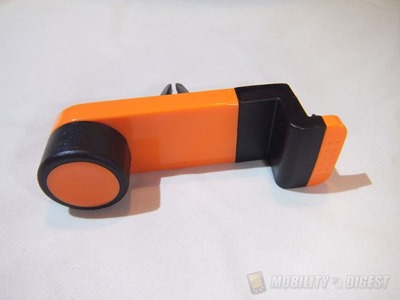 You phone sits between two black rubber ends. The one end looks round but it’s actually flat on the inside where it comes in contact with your phone. 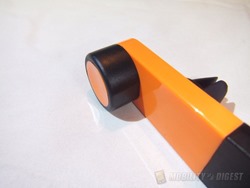 On the back or bottom you’ll find four thick and stiff but still flexible tabs that stick out, these are what go into your vent to hold it in place. It can rotate but it’s very hard to do, which I think is a good thing as it holds  your phone in the position you put it in. 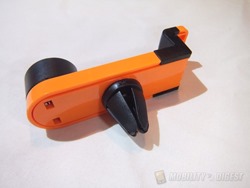 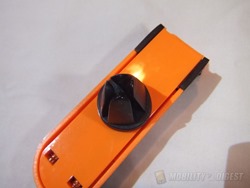 The spring is very strong, it was hard to open it with one hand to take the following picture for you, but it’s just to show you the two pieces and how they extend apart to fit your phone. 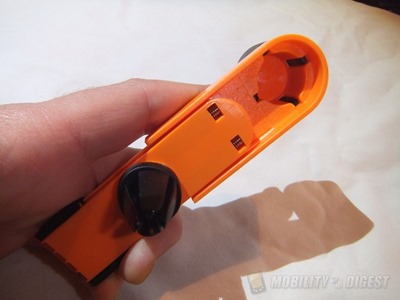 My phone is the HTC One and it’s big, but it fits in this holder with a little room to spare, even with the case on my phone fits just fine. To get your phone in you just spread the spring apart, put your phone in and let go so the tension of the spring holds your phone.

I have a Toyota Sienna XLE-whatever and the one thing I don’t like about it is the very steeply curved and angled dash on the driver side as it makes it hard to mount things using a suction cup. They just won’t stick at all because of the texture and the the angle. I have a stand alone GPS unit that I don’t use but my wife does sometimes and I had to use the flat plastic disc that came with it and permanently mount it to the dash so the GPS would stay in place.  The disc that came with the GPS isn’t exactly universal in size, it’s pretty much made just for that GPS mounting system. One thing I found when shopping for a car mount is that not many actually tell you the size of the suction cup, some do yes, but lots don’t so it’s kind of hard to know if it will fit my disc or not so I decided to go with a vent mounted phone mount. The mount does stay in place very well, it grips into the vents and will hold your phone in place. Here’s a couple shots of my phone in the holder, you can position it vertically or horizontally and it stays where you put it. 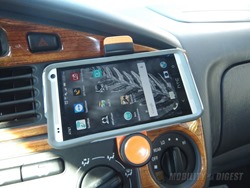 There is one small issue with this though, and it’s more about my phone. You’ll notice in the first picture above the mount is low on the phone, that’s because I have volume buttons on the right side and the mount is so tight it will actually push the buttons so it can’t be mounted in the middle. it’s not that big of a deal, it still works fine and holds my phone in place. I’ve drove around, hit bumps and all that and my phone stayed in the holder. It’s just one of those things that I thought needed to be mentioned.

There’s something else to note here, that’s the price. As I mentioned in the intro I got it for $6.99 with free shipping via Amazon Prime but you can get this exact same mount (white color though) for only $2.75 with free shipping, not Prime though, which means it can take weeks to get to you. Also about the price, you really have to watch, I’ve seen this same style mount for $22, and it’s the same thing except really it has a brand name on it.

It’s inexpensive, it’s well made, it works well to hold your phone in place and it fits large phones. What more do you need to know really?

If you need a basic phone mount that I can highly recommend you get this one.

I’m very careful with my devices, they cost of lot of money, and I trust that it will hold my phone  in place. The HTC One isn’t small or lightweight really, and it stays just fine in this holder.

Pros:
+ Fits large phones
+ Inexpensive
+ Works with most any vehicle

Cons:
– Might interfere with phones that have side buttons

Disclosure: This product was given to us for review by the company for review purposes only, and is not considered by us as payment for the review; I do not, never have, and never will, accept payment from companies to review their products.

My Country is Now Available for Free for Android