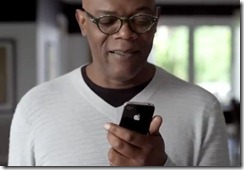 Samuel L. Jackson is the latest to endorse Apple and is now appearing on TV with a commercial entitled Date Night. In the commercial Samuel uses SIRI to cancel his Golf outing off his Calendar and then uses SIRI to help him find organic mushrooms for his risotto, how many ounces in a cu, which he admits he already knew. Then a reminder to put the gazpacho  on ice in an hour. After that Samuel gives SIRI the night off. We all know SIRI, nothing new in the commercial. We all know Samuel L. Jackson, but the two together is pretty cool commercial and to keep Apple up front and personal with a celebrity endorsement. Video below is on YouTube but Apple has turned off the commenting on it. Boo!

Infinity Blade For iPhone and iPad Free For Limited Time