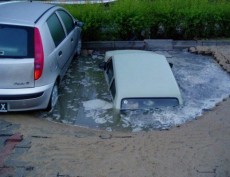 When the people of Hong Kong park their cars, they back in. Every single one of them. I respect that. When you first see it, when you get off the plane and your sleeping pills start to wear off, you find yourself in a garage, and when you look around a garage and see all the cars facing the opposite direction of to what you’ve grown accustomed, it blows your mind. Sure, you’ll come back home to the US with some souveniers and trickets, but the reverse parking is that part of Hong Kong you’ll keep forever.

Because space is such a premium, parking width, unless you’re extremely loaded, is tight as hell, they’ve got to fold in their mirrors first not as a precaution but because they’d otherwise not be able to fit. In fact, a car in Hong Kong is thirteen times* more likely to have mirrors that fold automatically in than those of cars in the States.

I can’t figure out why they do it and why we don’t. Maybe the tigher spacing has something to do with it, but I don’t understand why exactly, I see arguments to back in and go in forward on account of the tightness. Me, I happen to back in always, but that’s just an OCD thing. I suspect some sort of cultural element played a greater role in the genesis of this shared behavior, something in their history perhaps that we lack. You’d think at a liberal arts college like mine they wouldn’t have breezed past this. I mean, not like any of the other crap they taught me was important.

The precision with which one must park in Hong Kong, not to mention drive around the place, is remarkable; so when you notice a bad driver in the States and you pull up to look at the driver and you see that it’s a Chinese person and think “go figure,” well, maybe there is some truth to that stereotype here, but that behavior is aberrational to the Chinese. Maybe not in the States, but at least in their habitat, they are, and this includes the women (to a lesser extent of course), better drivers than we are. And don’t you accuse me of having the fever — I saw it firsthand and you probably didn’t.

They can handle a super typhoon like it’s no big deal. These suckers have been known to hit 190mph sustained. You ever drive 190mph and stick your arm out the window, tilting your hand to fly up and down like a dolphin when you were a kid? No? Well, as fun as that sounds, I can’t go on record advising you to try that, but off the record that’s how you can appreciate what these people are up against.

That said, from what I witnessed at least they have failed to innovate superior umbrella technology that can resist extreme winds without flipping up (man I hate that), so they’re not better than us across the board. Maybe they should use bamboo to support the umbrella’s canvas. They’ve got us with the parking, but can we at least beat these people with the umbrellas?

Their sashimi is better than ours. Forget about it. You don’t have to go to Japan for top shelf Japanese food, these Hong Kong folks (to avoid “Hong Kongers”) figured it out.

But I’ll close with a criticism. Their taller buildings, the relatively posh ones in particular — you know how over here we call the second floor the second floor? They call it something like the thirtieth floor. Same height as our second floor, just an absurd number. I can see the initial temptation of a city to do that, property values, but it just seems silly and shortsighted. An arms race between buildings, but instead of nukes, floor numbers. In their defense, maybe I’d succumb to such a temptation too if I had to be constantly reminded about how damn hard it is to park my car. I don’t know.

But what I do know is that if you visit Hong Kong, don’t be a hero, do not rent a car. Stick to the taxis and mass transit — hey, you can use your cell phones in the subway, plus they’ve got the anti-suicide glass barriers which I found impressive (not really, it kind of sterilizes the subway experience of its soul, along with the lack of rats which are in a way endearing).

* I made that statistic up about the rearviews and that link goes nowhere, a social experiment, who cares.