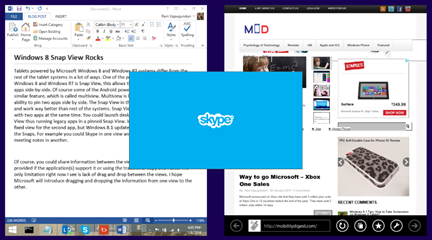 in a lot of ways. One of the powerful feature that Microsoft Windows 8 and Windows RT is Snap View, this allows the user to run and display two apps side-by-side. Of course some of the Android powered Samsung Tablets have similar feature, which is called multiview. Multiview is limited to certain apps and ability to pin two apps side by side. The Snap View in the Windows 8 systems differ and work way better than rest of the systems. Snap View gives the ability to work with two apps at the same time. You could launch desktop app in one of the Snap View thus running legacy apps in a pinned Snap View. In Windows 8 it is limited to fixed view for the second app, but Windows 8.1 update introduced custom resizing of the Snaps. For example you could Skype in one view and run Word to document your meeting notes in another. You could swap the apps in the views with different applications.