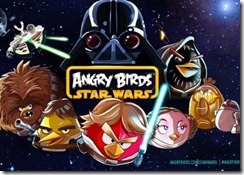 How can you tell that Angry Birds has gone from fad game to part of our culture?  When Lucasfilms, Inc. allows it to cross over into the Star Wars universe.

Lucasfilms, that bastion of merchandising, has allowed Rovio to announce “Angry Birds: Star Wars.”  Mark your calendars for November 8, when it will be released for iOS, Android, Windows 8, Windows Phone, and Amazon’s Kindle Fire.  (Yeah … I guess I know what I’ll be using as a carrot for Son’s good behavior at school for the next month.  And it’ll be worth it, if it sticks!)

Can’t wait until November 8?  Well, starting on October 28 you’ll be able to start buying the merchandise: action figures, plush toys, Halloween costumes, and more.  And more. And more. Until you’re pretty much overloaded.

And I’ve got some merchandise pictures for you.

I’ve found the reason carrier associates know nothing about phones.