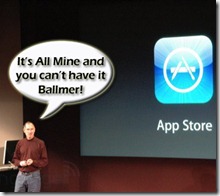 I saw this yesterday and thought I would pass this on in case you missed. On the day before the big Apple Media Event which will most likely announce the iPad 2 with only moderate improvements and what we hope will be an iPhone 5 tell all with with it’s new 4 inch screen, Apple has responded to Microsoft’s complaint to the U.S. Patent and Trademark Office about Apple’s pending application to patent the name “App Store” Instead of me summarizing, have a read on this:

Having itself faced a decades-long genericness challenge to its claimed WINDOWS mark, Microsoft should be well aware that the focus in evaluating genericness is on the mark as a whole and requires a fact-intensive assessment of the primary significance of the term to a substantial majority of the relevant public. Yet, Microsoft, missing the forest for the trees, does not base its motion on a comprehensive evaluation of how the relevant public understands the term APP STORE as a whole. What it offers instead are out-of-context and misleading snippets of material printed by its outside counsel from the internet and allegations regarding how the public allegedly interprets the constituent parts of the term APP STORE, i.e., ‘app’ and ‘store.’

I especially love the sentence: “Yet, Microsoft, missing the forest for the trees, does not base its motion on a comprehensive evaluation of how the relevant public understands the term APP STORE as a whole.

I am on the fence with this one and think that “App Store” is too generic and uses a term “App” that is not exclusive to Apple. Putting “App” together with “Store” I do think is unique to Apple and that they have really done a great job making the “App Store” a household name. It will be interesting to see how this one plays out. Stay tuned.

YouMail gets updated for iPhone