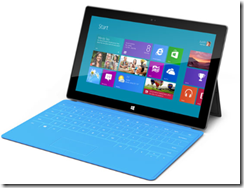 When Microsoft revealed the Surface they noted “ Surface for Windows RT will release with the general availability of Windows 8, and the Windows 8 Pro model will be available about 90 days later.” And today they said “Windows 8 will reach general availability by the end of October!“ So that means the Surface RT is coming in October. Now count with me and add 3 months and we’re in January, 2013 for the Surface Pro. Why is that a big deal? Well everyone buys everything in November and December – that’s the ‘holiday’ push we all know. Retail lives in those months. Black Friday gets its name for being the start of when companies are no longer in the red. So the delay is likely intentional designed to not piss off OEMs too much so the OEMs push out their tablets. Of course, this means MS is taking a hit themselves, but I guess it’s for the team. I think it’s a foolish move but I get it as a compromise to not blindside all of their partners.

I think the over/under is to see if they outsell the Kindle Fire 2 and/or the Nexus 7. They’re not going to overtake the iPad with a gen1 device with a new OS and a premium sticker price.  Remember though that they’re bringing a premium product at a premium price to and we’re comparing that to a product with a sticker that starts like a fire sale with no margins.