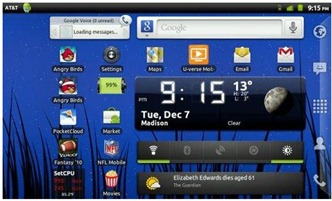 I know there are a small handful of you still in our community still rocking the Dell Streak like I used to be doing. But if you sold the Streak and moved on to greener pastures because of Dell ending the life of the Streak and not getting any more updates, then check this out. Dell just released a Gingerbread update for the Dell Streak! I find this totally bizarre as the Dell Streak, a fantastic piece of hardware , launched with Android 1.6 on it! It took forever to get Froyo, and now after it was killed off, Dell sends forth the most current OS (I know the Nexus just got released with 4.0 but there is nothing else right now and no updates until next year for select devices) called Gingerbread or version 2.3.x.

The Dell Streak 5, Dell’s triumphant return to the handheld market, will always be remembered for it’s potential with great form factor and build quality, and disappointment because of the launch debacle and update nightmare by Dell for Carrier based units. But, you can never count a Dell handset out it appears because if you are in the military, you could see a few of these. The Pentagon, even after Dell retied the Streak 5, has approved use of the device because of the form factor.  DefenseSystems.com claims that the military “likes the form factor.”

If you are still sporting the 5 inch Gorilla Glass beasty from Dell and want to update to Gingerbread, Android version 2.3.x, then download the file Here for the 155MB .pkg file. You will need to make sure that you have the correct stock recover version 350 before you begin and as always, make sure you back up your device.

What’s the odds of an Ice Cream Sandwich update Dell? Normally I would say there is no way, but with Dell, you never know.